The news offset early gains fueled by U.S. jobs and wage growth. January was the 11th consecutive month of U.S. job gains above 200,000. 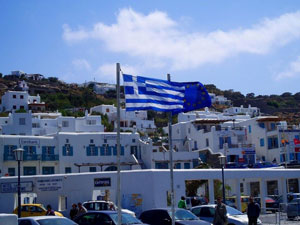 What Moved the Markets Today: The Greek debt downgrade came after Greece's new leftist government vowed to reject any deal that would maintain the terms of its current international bailout program.

Despite increased isolation from its Eurozone partners, Greek Finance Minister Yanis Varoufakis said he would seek a "bridge agreement" to stabilize the country's finances until the nation can propose a new plan to address its debts. The ratings agency didn't like the sound of that and downgraded the nation's long-term debt to B-minus from B.

The January U.S. jobs report came in with the economy producing more jobs than analysts expected. The U.S. created approximately 257,000 jobs, topping consensus expectations of 234,000. The unemployment rate climbed from 5.6% to 5.7% due to a rise of Americans entering the workforce.

Following the jobs report, futures contracts priced into the market the expectations that the U.S. Federal Reserve will raise rates a second time by December 2016. The markets already expect one rate increase by October 2016.

Money Morning Tip of the Day: Oil prices will continue to be volatile in the near term. But eventually they'll turn and run even higher…

Crude oil is struggling to find its bottom. Prices surged 19% within the span of four trading sessions ending Tuesday, only to fall nearly 9% Wednesday. Then yesterday oil prices rebounded from Wednesday's losses to rise 4%.

At some point, oil prices will finally bottom, stabilize, and rally even higher. And Money Morning Global Energy Strategist Dr. Kent Moors believes that process may already be underway.

But demand will continue to climb, which means "as future supply gluts are pared, the upside for selected operating companies will improve," according to Moors.

Moors doesn't see a return of triple-digit prices anytime soon. But "a range in the mid $50s per barrel will translate into some nice profits for companies already controlling ongoing drilling locations in established basins."

Moors shared his latest pick for profiting from oil's rebound in Bill Patalon's Private Briefing. Get it here: Why "Black Gold" + "The Blue Oval" =  Money in the Bank