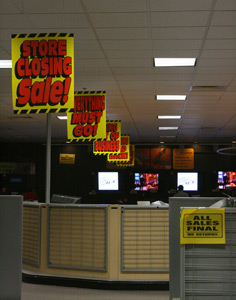 Next companies to go bankrupt 2015: RadioShack's story screams a lesson to companies everywhere: "Adapt or Die."

RadioShack Corp. (OTCMKTS: RSHC) took another step in its demise on Feb. 5, 2015 when it filed for Chapter 11 bankruptcy.

The formerly wildly popular electronic store hit its heyday in the mid-70s for its mass popularity of citizens band (CB) radio. Back then, citizens band radio made up for 30% of the chain's revenue. In 1977, it introduced one of the first PCs - the TRS80. Over the years, RSHC also became a top seller of the Walkman, CD players, mini-disk players, and beepers.

But RadioShack's popularity has waned in the new millennium. The company has failed to turn a profit since 2011. It made a last-ditch attempt to become lucrative by adding 3-D printers, drones, and wearable cameras to its online inventory in 2014. The efforts were simply too late.

On Feb. 17, 2014, the franchise begins its first wave of closings with 162 locations. The second wave on Feb. 28 saw 986 store closings. The third and final purge came in late March, when 636 more stores were shuttered.

The rise of the digital age and e-commerce played into RadioShack's demise. On Dec. 12, 2013, Warren Shoulberg of The Robin Report stated that "[RadioShack is] a store that has been passed by, with a format, merchandise mix, and physical presence that no longer registers with the American consuming public."

They made our list of the next companies to go bankrupt in 2015...

After RSHC, the 5 Next Companies to Go Bankrupt in 2015

Aeropostale manufactures and markets clothing for the teenage and young adult demographic.

However, the company's chief competitors - Forever 21 Inc. and H&M Co. Inc. - offer just as fashionable clothing at much cheaper prices. Plus, the overall teenage fashion aesthetic has changed, while Aeropostale's has not. The company continues to produce and market clothing that prominently displays the brand's name, which has long gone out of style.

Aeropostale racked up $77 million in losses in the most recent quarter (Q3 2014). That's more than six times its previous third-quarter loss of $12 million in the same period the year before.

With only $24.5 million in liquid cash, the company announced it secured $150 million in financing from a private equity firm on March 20, 2014.

CEO Edward Lampert has also failed to come up with a winning turn-around strategy. He attempted a membership club in hopes it would turn the business back into the buying club it once was, but it never caught on. SHLD generated negative operating cash flow of close to $2 billion in 2014. SHLD stock has fallen 7.5% in the last 12 months.

Our leader was born a Muslim and raised a Communist and is a pathological liiar and a traitor to this country. You cannot prove otherwise because he is the biggest hoax this country has ever embraced and has destroyed his past records. With this type of leadership no wonder everyone is cheating, lying and out to get whatever they can for themselves. This is most obvious in our government agencies which cover up their illlegal actions against anyone who speaks out about their failures and whose only defense is to call their accusers racists and and dangerous right wing wackos! Therefore any rational analysis of the markets or the economy are worthless as are the numbers the Fed puts out on unemployment, interest rates, illlegals, budgets or any thing else they use to push their agenda.

I've been having a terrible time of it lately finding a store that has tin foil in stock. Thanks for your, post, now i know where all the tin foil went.

Leo Oakes you are pure and simple a racist. Therefore your opinion is worthless

lea oaks is right on the button . The goverment has cover up and lied to the public . Out leader is a comunist and a muslim tatis wy he wot do anyting in the middle east . He has killed so many jobs .

Wow! Paranoia reigns supreme! Obama's guilty of everything but the bad weather burning trees in California!
Oops! He smoked Cuban cigars in the forests……!!!!
Probably an alien, too?

Lea Oaks, yes, the man IS black, get over it already geez.

Larry you are absolutely right. Since he controls the Justice Dept, the IRS, the FBI and the democrats in congress, nothing will ever be done to stop this dictator/king.
And the republican are not willing to do anything either. We The People have been had. Short of a nuke on DC nothing will change in this country.

Well jim. Ive reported your desire to inflict megadeath on the so called public servants and taxpayers of the district of Columbia to the nsa. Cheney corp rummie and dubyas baby.have fun with that..also at this point in american history you would have to be borderline retarded to think for 30 seconds(non consecutively) that there is any difference between the bush or obama agenda. Or dumbocrats or retardlicans. The truth is they are dumb, lazy but much more so evil. They are the evil doers. And so is that racist twit who started another thread with the "obama is a …." amazon dhgate walmart online..there are better options than radioshack. And my goodness the clueless empoyee deal. I will miss dpdt switches and potentiometers at a moments notice. Rip radioshack..sleep well sweet prince

It's true, The next company to go bankrupt is Forever21, Not because they are in financial crisis. But that is just the way Forever 21 has done their business. This would be the 2nd time they pull this off.

They already been rejected for chapter 11, So now they're talking about having a divorce setup. So the Owner can try again. The Wife has already left Forever21 (Was in charge of buying) and now getting legal documents ready for a divorce. Take what she can in court, which forces him to file bankruptcy and then their daughters will buy out Forever21

He has killed so many jobs .