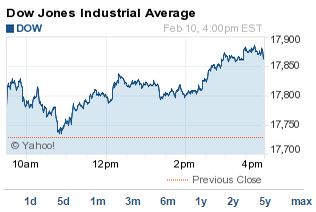 The Dow Jones added 139 points Tuesday. The cause? Investor optimism about a pending deal to address Greece's debt crisis.

Also fueling upward momentum for the DJIA were better than expected earnings from companies such as The Coca-Cola Co. (NYSE: KO).

What Moved the Markets Today: The European Commission plans to introduce a compromise proposal to address Greece's debts. The deal would give Greece another six months to work with lenders on pending issues and a post-bailout plan.

Money Morning Tip of the Day: "Transformational companies" held for many years can be the best investments of your lifetime.

Money Morning Executive Editor Bill Patalon recently discussed "transformational companies" in his Private Briefing research service. He defined them as firms so revolutionary, they change the way business in their sector is done. They even change buyer behavior.

When investors get a piece of one of these companies and have the patience to hold it for many years, the profit potential can be greater than any other investment they've made before…

Wal-Mart changed the way America shops. It shifted the power base in retailing from product suppliers to the retailer itself.

Timing – when these firms emerge – is a crucial factor. And Wal-Mart reached its own "critical mass" just as the U.S. middle class emerged.

Let's look at what would have happened if you'd invested in Wal-Mart in its early days.

So you see, spotting and investing in one of these revolutionary firms early on can lead to massive long-term returns. And we're here to help you spot those next Wal-Marts.

Patalon revealed another "transformational company" that investors can get in on today, and at a discount – go here to find out what it is…