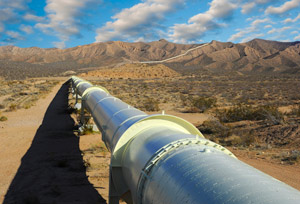 But this is not the first international pipeline project seeking approval...

According to a 2013 Congressional Research Service study, 46 oil and natural gas pipelines operate across the U.S.-Canada border. If you include Mexico, the United States has 70 cross-border oil and gas pipelines.

Of course, the Keystone pipeline veto is more to appease critics who are concerned about climate change and damaging spills.

The Keystone project in question, however, would make up a tiny fraction of the U.S. pipeline miles.

According to the Association of Oil Pipelines, the United States had 60,911 miles of crude oil pipelines as of the end of 2013. The additional portion of the Keystone that needs approval would be just 1,179 miles.

And crude oil isn't the only hazardous liquid in our pipelines. Including liquid natural gas (LNG) as well as refined petroleum products such as gasoline and jet fuel, the United States had 192,396 miles of dangerous liquids pipelines as of 2013. And that doesn't count more than 300,000 miles of natural gas pipelines.

They're everywhere. Just look at this map: 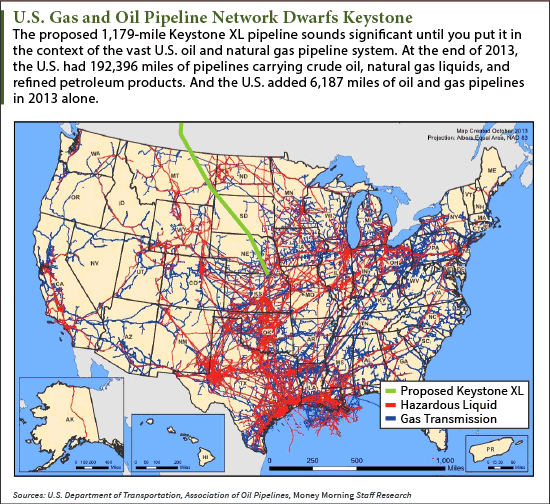 That's not all. If you include transmission pipelines - the ones that go through neighborhoods and supply individual homes - the U.S. has 2.5 million miles of hazardous liquid pipelines.

The Keystone pipeline would add 1,179 more miles. That would be:

But what's most absurd about this controversy is that an almost identical project just went operational last month.

And virtually no one noticed...

It's the environmentalists and their short sighted mentality. They buy a prius and get all warm all over about themselves without admitting that power it gets from a plug comes from where, the air in their heads? Petrol traveling by rail and truck routinely have spills and are far more dangerous than any pipe line. Pipelines are pretty safe and reliable. look at the Alaska Pipeline, built in 70's and still kicking. All those caribou be just fine with it. These folks need a clue.

What all the proponents of "Keystone is just another pipeline" forget is that none of the other pipelines endanger the groundwater for the entire midwest. This doesn't make them good, and the Enbridge pipeline accidents should prove that, but it does make them less permanently dangerous to more than the climate.

It's not the "tar sands" oil itself that is so much worse than other heavy crudes, it's the high proportion of toxic solvents that are present in the pipeline to make the almost solic crude liquid enough to move through a pipeline. It is this half of the Keystone, and the area it went through, that makes it especially bad.

The fact remains—more investment in prehistoric energy sources is short-sited and should not be welcomed. America has better things to do with it's water and land than
be the conduit for fossil fuels, let alone for foreign ones. I think Canada should keep it's unrefined oil within its borders. If it isn't comfortable with tearing up its own land and polluting it's waters and air from shipment and refining, it should just leave it underground.

This entire subject is just more proof that politics is a mere wasteland for second rate power hungry minds. It consists on a broad scale of people funded by lobbyists and special interest groups with legal bribes, (Mordida), for my Latino friends to provide special favors which typically harm the general public which they are sworn to represent and protect.

Pipelines are by far the safest way to transport various hazardous commodities vs. rail shipments for example. Warren Buffett with his burlington Northern railway has established a virtual rolling pipeline with tanker cars transporting the oil that the final leg of Keystone would do. He accomplished this with massive donations buying nay votes from political leaders squashing Keystone for personal profit.

Most of us know how many horrific derailments have and continue to happen on these rails causing massive spills and destruction from the explosions. Yet, there are virtually no large spills on record from pipelines to rival rail accidents.

The world's so called best investor is quite the patriot in the eyes of the media, a trueism at the expense of the average American.

At nearly 63 years old, I hope I live long enough to see the day if ever when the American people unite in a common cause to hold our politicians accountable for
purposely destroying the fundamental principals of our society for personal gain.
I fear not.
I support a return to the traditional values America was founded upon and strict adherence to our original constitution. Not the one rewritten by this administration!

you comment exposes you like all your friends comments. You start off with the "dangers" of the pipeline route ignoring how much more dangerous the current trucks and trains are and that the pipeline would reduce the chance of spillage. Then you and your friends can't help but get to the real reason for your deceptive protest. You go off on the "dirty" tar sand oil and all oil. I drive some days 100-200 miles in my work (it varies) and no current electric vehicle will give that range carrying a load. So you would like me to join the approximately 100 million unemployed in this country. Believe me you can better spend your time creating electric vans that are more cost effective than gas or diesel and my company will buy one. By the way the point of the article is that you and your friends are wasting time on symbolism since a keystone twin was built around your protesting ways.