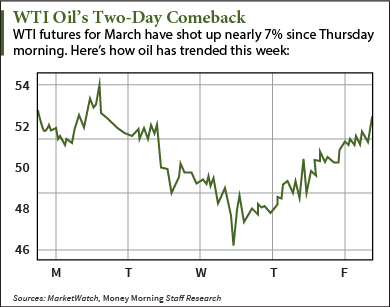 Oil prices have been U-shaped this week. They hit a high of $54 midday Monday and a low of $48 midday Wednesday.

Energy has been the third-best performing sector on the S&P 500 this week, behind consumer discretionary and consumer staples. It's up 1.57% through Friday morning. It has risen 3.7% in the last two days alone.

Even as the current price of oil per barrel is rising, Wall Street firms keep releasing bearish outlooks. In a forecast Monday, Citigroup Inc.'s (NYSE: C) Global Head of Commodity Research Ed Morse reported the recent surge in oil prices is nothing but a "head-fake." He said oil may plummet another 60% to $20 a barrel.

Citi reduced its annual Brent crude forecast for the second time this year. According to Morse's report and Bloomberg, oil prices in the $45 to $55 range are unsustainable and will cause a "disinvestment from oil." He says prices will average $54 a barrel in 2015.

But as our energy expert Dr. Kent Moors explains, here's what these analysts misunderstand about oil…

This Precious Metal Will Have a Precious Year… Gold has been struggling for three years. But thanks to growing demand in Asia, gold will have a tremendous turnaround in 2015. Money Morning's Resource Specialist Peter Krauth recommends two great ways you can profit from gold's big year – get started here…

Why Citi Is Wrong About the Price of Oil Per Barrel

Oil demand continues to climb at a steady pace. The International Energy Agency (IEA) projects global oil demand will jump from 910,000 barrels per day this year to 1.13 million in 2016. That massive 24% increase will keep the price of oil per barrel steady.

Bearish experts have done nothing but talk about the United States drowning in oil. But the number of rigs has fallen to the lowest in over a decade.

Oil companies are also delaying expensive projects and cutting capital expenses however they can.

"Yet the doomsayers respond that there is still considerable volume available from ongoing existing projects," Moors noted. "But, as usual, they miss the governing factor. The continuing volume from existing projects is already factored into a market where demand is not collapsing."

That means stockpiles in places like Cushing, Okla., won't be a factor moving forward. In the months ahead, arbitrage will bring the market back to its right state of balance.

"Yes, this is a "brave new world" of oil," said Moors. "Yes, the factors colliding are operating in new ways. But it's still the trade in oil that determines the price.:

That's why the price of oil per barrel is steadying.

"The trajectory now clearly indicates a new medium-term floor in the mid $50s in New York and about $60 in London," Moors said Tuesday. "By the fourth quarter of this year, oil prices will likely trade even higher, somewhere in the $70s."

The Shape of the World Today Is Dominated by Energy… On Jan. 29, two events thousands of miles apart demonstrated how central energy has become in the world of geopolitics. The map is being recast right before our very eyes. Here's why the Keystone XL will be built in the end…

Agree that demand is growing and that the oversupply margin is thin and will shift back to demand imbalance when production levels off. But Baker Hughes rig count data suggests it's correct that rig count is lowest in a decade.

Baker Hughes data shows 1056 oil rigs in operation in North America as of February 13. The lowest count in past decade was in June 2009 at 179. http://phx.corporate-ir.net/phoenix.zhtml?c=79687&p=irol-reportsother

Their worldwide rig count data showed 3,309 rigs in operation as of January. That's the lowest count since April 2013. The lowest count in the last decade was 1,983 in May 2000. http://phx.corporate-ir.net/phoenix.zhtml?c=79687&p=irol-rigcountsintl

The market has been consistently oversupplied for several years but prices stayed high until mid 2014 because prices were set in the futures markets as speculators and major investors bought oil as a money substitute as the central banks printed money. However, that trade stopped working for a couple of years because the physical market did not support it and eventually the fundamentals came home to roost.

The market may be approaching balance, but it's not there yet, and as always, the supply and demand for futures will set the market price, not the supply and demand of physical. As we all know, the futures markets often have nothing to do with economic fundamentals. They can remain divorced from reality for a long time.

The best way, perhaps the only way to trade these markets is through technical analysis. There's a reason commodity traders trade the charts. The fundamentals of supply and demand in the cash market are important for context, but they don't set the price. Knowing that the futures markets have mispriced reality is not enough. Timing is everything.