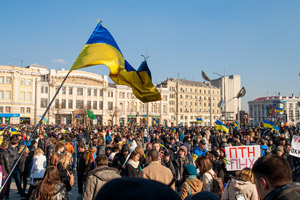 Dow futures today were flat this morning compared to the Dow close on Friday. On Monday, the markets were closed in observance of Presidents' Day. The Dow Jones Industrial Average came off the holiday weekend at 18,019.35.

This morning the DJIA will be keeping an eye on events in Europe, as geopolitical concerns threaten a sustained rally for equities markets. Over the weekend, pro-Russian separatists insisted they have no plans to honor a ceasefire agreement that would have reduced violence in eastern Ukraine. Their pronouncement puts the deal in question. Meanwhile, debt talks between Greece and the European Union collapsed on Monday. The EU is attempting to increase pressure on Greece to honor the terms of its international financial rescue program. Shares of National Bank of Greece (NYSE ADR: NBG) slipped more than 11% in pre-market hours.

Money Morning Tip of the Day: The only thing standing between your portfolio and catastrophic loss is your own caution and proper risk management.

Risk management may not be the most exciting part of investing. But it is the most important.

And a tool called "position sizing" stands out above all others as the most powerful, and not just for cutting risk either, but for boosting your profits, too.

The concept is simple. Controlling the amount of money you place in each trade can lead to bigger profits and mitigate the risk of a catastrophic loss.

Position sizing is the science of cutting risk in your portfolio down to the bone. It answers the question "How big should I make my position for any one trade?"

Many investors think they have this covered with trailing stops that take them out of an investment when some predetermined limit is hit.

Position sizing is different. It's about determining how much of something you can buy for maximum profits, or even if you can afford to buy in the first place.

Understanding position sizing will put you miles ahead of other investors who spend all their time wondering what to buy while ignoring the critical question of how much to buy.

To learn three different methods for sizing your positions, with step-by-step instructions for each, go here: This One Risk Management Tool Made the Difference Between Bankruptcy and $13 Million