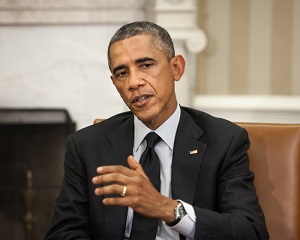 The first cybersecurity profit alert was in early February. That's when President Obama requested $14 billion in his 2016 fiscal-year budget for increased cyber defense. Roughly $5.5 billion of that is requested just for the Pentagon.

The second came just last week, when President Obama spoke at the first ever White House Summit on Cybersecurity.

"In recent breaches, more than 100 million Americans had their personal data compromised, including, in some cases, credit card information," President Obama told a room full of leaders from Congress, law enforcement, and the tech industry.

The White House's commitment to cyber defense means billions of dollars will start to pour into cybersecurity companies - which is huge news for investors.

How the Government Is Making Cybersecurity Stocks a Win

The reason for the government's cybersecurity push is the staggering amount of money spent preventing and responding to cyber threats every year...

And it isn't just tech firms that are targeted. Every industry is under attack:

"More than $95 billion will get spent this year alone trying to prevent the inevitable assault on your private information and confidential records," Riggs told his Money Map Report readers in February.

By 2019 cybersecurity spending will reach $155.74 billion, according to market research firm MarketsandMarkets. That's a 63% growth rate.

And the problem isn't isolated to the United States - it reaches every corner of the globe.

According to McAffee Inc., cybercrime costs the global economy more than $575 billion per year...

"That's more than 3% of America's 2014 GDP, and it's creating a lot of pent-up demand from countries, companies, and individuals determined to protect themselves," Riggs said.

That's why the cybersecurity field will see a pickup in profits. The best way to start investing in cybersecurity stocks in 2015 is to take this balanced approach...

The Best Way to Invest in Cybersecurity Stocks Now

Check out Sysorex (SYRX), an emerging growth cyber security,data management company. SYRX has served 1,000 customers since incept, is integrating the services of four acquisitions, and is participating in a recently announced multi billion government contract.