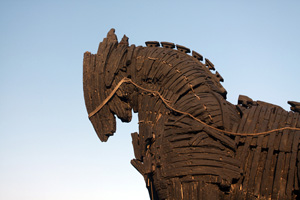 This morning, investors focus on Greece and the nation's ongoing pursuit of a deal to extend its debt obligations to European Union partners. Talks have already broken down twice and yesterday, Germany rejected a new plan from the Greek government, calling it a "Trojan horse."

"We are not discussing the continuation of the program," Greek spokesman Gabriel Sakellaridis said after the rejection. "The Greek government will maintain this stance today, although conditions have matured for a solution to be found at last."

Negotiations are expected to continue into the weekend. Greece has until the beginning of June to provide a suitable plan to its European creditors. If the country cannot strike a deal, it may default and fall out of the Eurozone.

Money Morning Tip of the Day: There is always opportunity in chaos, and the Greek debt crisis is no different. The best way to profit is to make the three trades outlined below.

Greece is the single most important thing happening in the markets right now. Although it's taking place thousands of miles away, you need to understand how it will affect you.

Simply put, Greece lied to get into the EU, managed its finances terribly, and now wants to renege on its obligations... or at least renegotiate them.

Greece owes some 320 billion euros to its creditors. And now they're refusing to pay it back.

There are three possibilities for what happens next: (1) Greece departs the euro ("Grexit"), (2) the ECB forces new regulations on Greek banks, or (3) an agreement is reached at the last minute.

No matter what the outcome, here's what to do now to ensure you profit from the coming chaos:

Make those moves and when the mainstream media proclaims the end of the financial universe as we know it, you'll already be set up for big gains.