Now that Greece has a new government, its focus on debt negotiations continue with a different front man representing the beleaguered country.

Citizens remain skeptical at best and are rushing to get their money out of Greek banks while Prime Minister Alexis Tsipras makes overtures to Russia and China for funds to alleviate the country's fiscal crisis.

Things could go south quickly as the government and banks still face a major cash crunch, despite Friday's market-rallying announcement of a four-month reprieve from Eurozone creditors.

Amidst the chaos, some exceptionally rich opportunities borne of fear are taking shape…

Yanis Varoufakis, who admitted he was the finance minister of a bankrupt country, assured in the past "we will never ask for financial assistance in Moscow." Conveniently, that was worded not to rule out accepting help should it be offered. Nikos Chountis, deputy foreign minister for Greece, confirmed that both Russia and China have already made offers of financial support.

While the West may not have warm feelings for Russian President Vladimir Putin, that's not true everywhere, particularly in his home country. Recent polls in Russia indicate 85% of the populace trust Putin and 74% would vote for him if elections were held now.

Connecting the threads, when Greece's Tsipras won his own recent elections, Russian president Putin was quick to call to congratulate him and invite him to Moscow.

Renewing European sanctions on Russia depends on Greece, as unanimity is required of all EU members. This is one tool of leverage Greece has on Europe in seeking Russian aid. Consider too that Russia is Greece's largest trading partner. Moscow's "friendliness," in the region has recent precedent as Cyprus has been in talks to provide Russia with access to its ports and airstrips. Officially, that would be to meet humanitarian needs, but rumors are flying of the possibility for military access.

Ties between these nations run beyond recent history. Greece and Cyprus both are Orthodox countries, a religious heritage they share with Russia. In the early 1800s Greece benefitted from Russian help in its War of Independence from the Ottoman Empire. Today there are tens of thousands of Greeks living in Russia, and vice versa.

But the former Soviet superpower has yet another ace up its sleeve of influence.

Russia has its eyes on Greece for strategic purposes. The original South Stream pipeline, intended to cross the Black Sea to Bulgaria, was cancelled by Putin on December 1. He blamed the EU, saying they were "unconstructive" towards cooperation, as was clearly Bulgaria's decision to end development of the pipeline on its territory.

Instead, the 63 billion cubic meter gas pipeline will now cross the Black Sea into Turkey, and then on to its border with Greece, creating a gas hub for delivery to Europe. That allows Putin to bypass the hotspot of Ukraine while dangling carrots in front of Greece.

Meanwhile, there's been no lack of volatility in Europe as debt negotiations with Greece swing back and forth between encouraging and disheartening. Friday's "rally" was but one of many ahead.

These troubling oscillations are certainly felt by Greek citizenry. It's estimated that Greek banks are bleeding up to 2 billion euros daily, with as much as 23 billion euros departing accounts over the past two months. That money is heading to perceived safe havens, often elsewhere in Europe. At current capital depletion rates, it's estimated that Greek banks could run out of collateral for new loans within three months. As a stopgap measure, they've been tapping emergency funding from the Bank of Greece, the country's central banking unit. 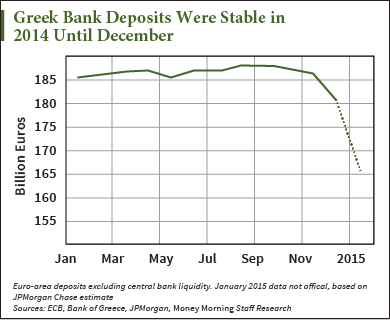 Who can blame the exiting depositors?  A recent Bloomberg piece reported on a drastic measure that Greece may be poised to institute, which is likely only exacerbating the exodus. Daniel Gros, director of the Centre for European Policy Studies said the outflows from Greek banks could prompt the government to resort to Cyprus-style solutions: imposing capital controls.

In some cases, worried Greeks are stashing physical cash underneath floor tiles, or burying it in the garden. According the U.K. Royal Mint, Greek demand for gold coins is up as they seek out another safe haven from political chaos.

The Opportunities You Can Seize

Clearly Greek citizens and investors are scared, with good reason. Ironically, that's opened up some opportunities that may simply not have existed otherwise.

Greece once again stands to make a choice that has proven disastrous in the past: turning East and all that it pertains — authoritarianism, intolerance, rabid anti-Semitism — instead of the West and its liberal, democratic, multicultural tradition garnered from having participated, bloodily, in the Renaissance, Reformation, and Enlightenment. The coup de grace to the financial crisis in Greece, would then turn into its proverbial tragic version, as the country becomes a pariah among the West's democracies, and suspect as a NATO partner for consorting with the likes of Putin. In this scenario, Greece has the worst possible government, made up of former Communists, anarchists, and anti-Americans while aligning with a far right-wing partner, Panos Kammenos's inelegantly called Independent Greeks. This coalition is a marriage made in hell, destined to undo the progress made by immediate past combination of governments of New Democracy and a reconstituted PASOK. This is not only a Greek tragedy in the making, but a global farce that only those who do not wish the country well can enjoy!

The Greece Government stated they would give their "Deal" to EU on Sunday Feb 22, 2015, which has now past. Therefore, the Greece new Leftist Government , who cannot cross their "red lines" lest they alienate their Electoral Base, has finally acknowledged an impasse has been reached ! This will drive the Euro sharply higher , along with Gold price, as Greek Exit becomes the only path forward, thus "weeding out the weak sister" from EU, and thus leaving both stronger !! The strong Negative Correlation between DJIA and Gold price will simultaneously drive down DJIA as Gold price rises in a sustained and sharp manner !!

I hope that the British Parliament also asks HSBC Executives about the Dec 2014 Internet article written by Dr. Paul Craig Roberts who claims in that long and detailed article titled "Inside Story On Gold Price Manipulation — Naked Gold Shorts" , that the FRB and some large Banks (giving HSBC by name) are in a collusion to drive Gold price lower by using "Naked Gold Shorts" to sharply drive down the Gold price at thin trading volume hours at EST of 2:30 a.m., 8:20 a.m. , and 6 pm .

Dr. Roberts goes on to explain that this collusion also explains why the FRB Branch of New York told Germany in early 2014 that Germany's request to immediately ship Germany their requested Gold would require 7 years to complete, and Germany is still waiting ! This scandal will likely convince India PM Modi to remove all restrictions of Gold Imports into India, so that India will once again become the world's largest Consumer of Gold, which is very Bullish for Gold price !
I have observed in early Jan 2015 a large and immediate drop of $10 in Gold price to $1,170 per oz at the time of 8:20 a.m. EST listed by Dr. Roberts, and likely was the result of "Naked Gold Shorts". However, this time it backfired on them, as the $1,170 Gold price level held solid until 10:15 a.m. EST when Gold suddenly rallied sharply higher and closed up a few dollars per oz that day ! This Gold price action locked in the Classical Bear Trap, since the Gold price low of $1,131 per oz occurred a few weeks earlier ! So Gold price is now likely rising up on its 3rd Leg Super Cycle to new all-time-highs well above $3,000 per oz through the year 2020 , after completing the Classical Bull Market Correction to the 2nd leg Super Cycle as I note above! This historic ongoing Gold Bull Market started at $253 per oz in 2001.

Liked your comments on the Russia-Greece relationship. Greece may have an even better reason to vote against Russia sanctions than France (with it's two rusting warships that were/are to be delivered to Russia). In any case, when business relationships are allowed to once again thrive, relative peace will return… and the politicians will likely try to take credit.

Please be more careful with statements about "all time low" for the Euro. Most of us can still remember when it was only 88 cents for a Euro. Those were some happy European traveling days!