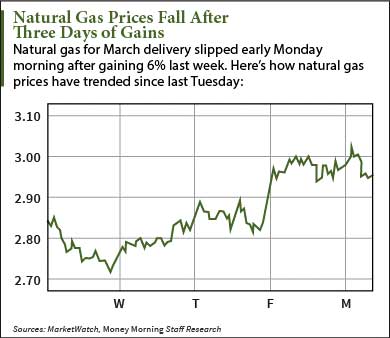 Natural gas prices today (Monday) have pulled back after last week's rally - but don't let it fool you. Natural gas is going higher in 2015, and there are four major factors that will get it there.

Natural gas prices rallied 4.13% Friday to settle at a four-week high of $2.951. Friday's rally was part of a three-day stretch that saw natural gas futures climb 6.9%.

But the drop in natural gas prices today won't stick. One reason is severely cold weather is about to eat up natural gas supply.

Last week's arctic blast hit central and eastern parts of the country and contributed to at least 22 weather-related deaths. The National Weather Service projects another blast extending into March, with extremely low temperatures covering most of the country.

Roughly half of U.S. homes use natural gas for heating fuel, according to The Wall Street Journal.

How to increase your investment returns, starting today: Many investors have three habits that kill returns. One of them is "emotional investing." Find out the other two and how to avoid them in our free guide: Make 2015 Your Wealthiest Year Yet

Frigid U.S. weather is a short-term natural gas price driver. There are four other long-term catalysts Moors has outlined for readers...

According to Moors, there are four "super shifts" in motion that will send natural gas prices higher this year.

One is increased use of natural gas in electricity generation.

This nationwide transition from coal to natural gas has been going on for some time. Several coal-dominant regions of the country have already reached usage equilibrium with gas.

But the move to natural gas is gaining momentum.

"By 2020, at least one-third of the U.S. generating capacity derived from coal will have been retired since 2012," Moors said. "The vast majority of that will be switching over to natural gas."

"To put this in perspective, this transition alone - ignoring any of the impact on coal from the intensifying Environmental Protection Agency standard increases - will eliminate almost twice the current natural gas storage surplus nationwide."

That's just one of Moors' four natural gas industry "super shifts." Here are the other three - and how they're the salvo of investing opportunities in several areas of the natural gas market...