Talk about market volatility: Investors in LinkedIn Corp. (NYSE: LNKD) recently had one of those days we all dream about.

On Feb. 6, shares of the big-cap business social networking player soared 10.7%. In a single session, it returned five times as much money as the Standard & Poor's 500 Index has all year. 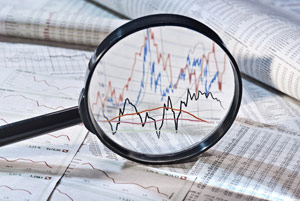 If you're not careful and haphazardly apply your trailing stops, this sort of volatility can knock you out of a good stock before you're ready - and you can lose a lot of money.

However, there's a tool you can use - one that many investors know little about - to turn these choppy markets into huge profits.

It's perfect for today's markets...

On the surface, here's what happened Feb. 6: LinkedIn reported a great quarter, while Yelp reported a mediocre one.

But there's much more here than meets the eye.

This one-day snapshot perfectly illustrates the stock market volatility we've seen over the last several months. And we'll be dealing with this choppiness for the foreseeable future.

As I've been saying, I still believe we are in the midst of a generational bull market for U.S. stocks.

And I haven't seen anything in the last several months to make me change my view. In fact, after surveying some key economic trends, I'm still very bullish about the U.S. economy and the tech sector.

Let's start with the one thing that affects every working American - jobs. In January, employers topped forecasts by adding 257,000 new jobs.

That's part of a major trend. Just two weeks ago, the federal government revised upward the hiring numbers for November and December, making 2014 the best year for job growth in 15 years.

This comes on top of robust auto sales. With total sales of new cars and light-duty trucks hitting 16.5 million units, in 2014 automakers just had their best year since 2006.

For tech investors, there's even better news. Tech and healthcare (including the biopharma companies we look at here) firms are crushing on earnings.

According to Thomson Reuters, 88% of firms in those two sectors have beaten earnings forecasts so far this season. That compares with about 72% for all other industries.

So, more people are working and buying cars than in years - and companies are raking in the cash.

But the market is so turbulent.

It boils down to a giant economics debate.

On the one hand, there's a group of investors who think falling energy prices will help stimulate the entire economy.

With crude oil prices down 50% since last summer, everything from tourism and construction to manufacturing and electronics will benefit from cheap energy.

On the other side of the debate is a group whose members believe the rising value of the dollar trumps all. The thinking is this: Higher dollars means fewer U.S. exports and less growth for firms with foreign sales.

Against the backdrop of this debate, the stocks of companies whose earnings beat Wall Street's forecasts rally. And those that miss - sometimes by just a penny a share - sell off on heavy volume.

This is the kind of climate that makes many retail investors nervous.

But they don't need to be.

Here is a tool tailor-made to turn choppy markets to your advantage.