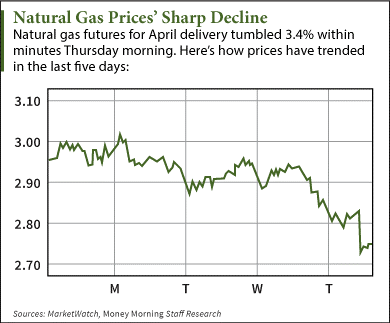 Futures for April delivery have taken a beating this week, falling 8.3% since Monday.

"From the rise of U.S. liquefied natural gas (LNG) exports to both Europe and Asia to the transition well underway from coal to gas in the generation of electricity, the ability to produce more unconventional gas is being met by a rise in the demand curve," Moors said.

According to Moors, everyone thought the United States would need LNG imports to meet 15% of its gas needs by 2020. Instead, the U.S. could be providing 8% to 12% of worldwide LNG exports by then.

Thanks to the U.S. Department of Energy finally letting companies export, there'll be plenty of opportunities for investors to get a piece of the global trade.

"There is a range of profitable moves about to hit," Moors noted back in October. "Natural gas normally doesn't have the sizzle that crude oil has among investors. Of course, making money tends to change that real fast."

Moors' favorite pick in the sector is up about 675% since he first told readers about it November 2011. It was the first company to receive Energy Department approval to export to countries that don't have a Free Trade Agreement with the United States.

Moors noted in 2011 that Cheniere would increase in value with every contract signed. It's already inked five 20-year export contracts with importers in Europe and Asia.

Find out the full story on why Cheniere is a "Buy" and get today's most profitable natural gas news by signing up for Money Morning today.