The DJIA index dropped 82 points Friday. The cause? Mixed economic data, including a downward revision of fourth-quarter GDP. 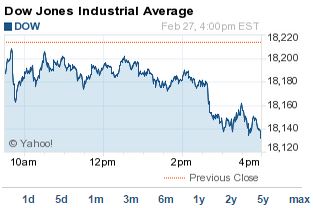 What Moved the DJIA Index Today: Mixed economic data gave investors little enthusiasm to push stocks higher Friday. This morning, the second revision of the Q4 2014 GDP registered at 2.2%, which beat expected growth of 2.1%. Still, the figure slipped from the previous estimate of 2.6%, and the pace is a steep decline from the Q3 2014 final reading of 5%.

Meanwhile, the February reading of the Chicago PMI, an index of business activity in the U.S. Midwest, slipped to its lowest level since July 2009.

Money Morning Tip of the Day: High-margin specialty drugs, and specifically drugs used to treat hepatitis C, offer one of the best profit opportunities right now in the pharmaceutical market.

High-margin specialty drugs are prescription medications that treat complex, chronic, and debilitating diseases. They're very expensive - as much as hundreds of thousands of dollars.

The market for these medications will quadruple over the next five years. Consumer spending on these drugs hit $87.1 billion in 2012. In five years that number will soar to $401.7 billion.

Some of the priciest high-margin specialty drugs include Soliris, developed by Alexion Pharmaceuticals, and Elaprase, by Shire. Soliris treats a rare blood disorder and costs patients roughly $410,000 per year. Elaprase treats Hunter syndrome and costs $375,000 per year.

The biggest profit play of all in high-margin specialty drugs comes from makers of hepatitis C treatments. An April 2014 report from Express Scripts found that spending on hepatitis C drugs is expected to increase by more than 200% in both 2015 and 2016.

Newer and more convenient treatments in the coming years will drive sales. And the high price of these hepatitis C drugs will propel the stocks of the pharmaceutical companies that make them to new heights.

Get the best stock pick to play this trend right now, here: "These Pharmaceutical Stocks Let You Tap into a $402 Billion Trend."