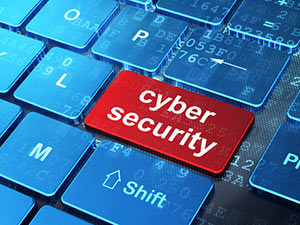 Cybersecurity companies have become one of the most promising new industries to invest in today.

Research from MarketsandMarkets indicates that more than $95 billion will be spent on cybersecurity efforts this year. That figure will hit $155.74 billion by 2019.

And while all types of cybersecurity companies are cashing in, one section of the market is offering the best profit opportunity now. Its technology is a step ahead of the competition...

These Cybersecurity Companies Are Winning Their Market

Money Morning Executive Editor Bill Patalon has been recommending cybersecurity stocks to his Private Briefing investment service readers since 2011. And a massive industry "buy signal" this month tipped him off to the sector's newest play. 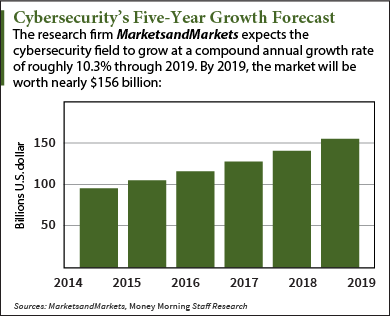 You see, in early February President Barack Obama dedicated $14 billion in his 2016 budget proposal to cyber defense. The money will be used to safeguard both government agencies and the private sector.

"The Obama budget underscores, yet again, that cybersecurity is a high-growth business. And it's a business we want to have a stake in," Patalon said.

2FA adds an extra layer of protection to online transactions. That's critical, because our typical level of protection is dangerously insecure.

"Usernames and passwords - the protective measures we're the most familiar with - are only single-factor authentication," Robinson said. "With 2FA, you must be able to provide two, or even three, credentials. And that elevates your personal security by a massive amount."

Different types of credentials include:

The use of fingerprints as an extra layer of protection is becoming much more common.

Cybercrime costs the global economy more than $575 billion annually. Here are five of the biggest U.S. breaches in the last 12 months:

Apple Insider reported in early February that Apple Inc. (Nasdaq: AAPL) had patented a new technology allowing people to scan their fingerprints on their iPhone's touchscreen. Users had been using the iPhone's "home" button for fingerprints. This new technology makes it even easier.

"The patent application shows fingerprints all over the screen, potentially showing a combination lock for additional security on iPhones and iPads," Patalon said. "Combine biometrics with a password and you've got 2FA technology in your smartphone."

This extra security technology comes at the perfect time. According to McAfee Inc., cybercrime costs the global economy more than $575 billion per year...

"These huge numbers prove the point we all know - we'll need more and more effective cybersecurity over the coming years, and we're willing to pay a lot for it," Patalon said.

And there is one cybersecurity company in particular that will see tremendous growth from 2FA in 2015...