Yet that's exactly what you should be doing. 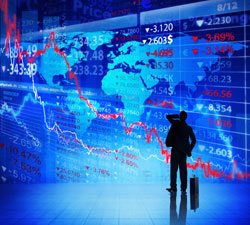 …the markets are always making new highs.
It's how you deal with them and how you pick the companies with the potential to go even higher that separates the winners from the losers.

I'm going to prove that to you right now.

And then I'm going to show you three tactical criteria you can use to judge for yourself whether something you want to buy "makes the grade."

Here's why market highs alone can't be a deal-breaker for you.

Market Highs Are the Norm

People tell me all the time that they don't want to buy anything, especially with the markets near all-time highs. I get where they're coming from.

The markets are almost always at or near all-time highs. That's how they work. Over time there's a very powerful upward bias that mirrors the amount of capital that's constantly chasing quality companies.

To put this in perspective, consider that according to Ric Edelman, president of Edelman Financial, the markets achieve new highs – on average – roughly once every 18 days.

I know that sounds like a loaded statement and you're right… it is. But I am sharing this with you for a reason – even the lows of 2003 and 2008 were all-time market highs compared to 1990 or 1972. It's your perspective that changes.

My point is that the overwhelming majority of people who try to time the markets based on a combination of emotion and whether they think it's high or low usually wind up getting it backward.

Not surprisingly, they doom themselves to pitiful returns.

From 1993 to 2013, for example, the average individual investor trying to guess which direction things were going performed so poorly that they lagged behind every asset class save three: EM Asia, inflation, and Japan. 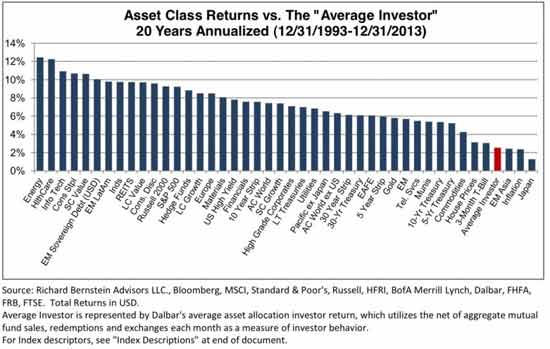 There are a couple of ways around that, but none is more powerful than buying a strong, growing company tapped into one of our unstoppable global trends even when it's at or near 52-week highs.

Consider Altria Group Inc. (NYSE: MO)…
I recommended the company on Feb. 23, 2010, and got more than a few questions from incredulous observers and some readers wondering if I'd finally lost my marbles.

Turns out that folks weren't concerned with the fact that big tobacco was under tremendous legal pressure. Nor did they care that anti-smoking groups were gaining ground and threatening revenues.

No… what troubled most readers and analysts even more was the fact that Altria was only pennies away from 52-week highs. To their way of thinking, the fact that it was tapping new higher prices meant that the stock was ready for a fall.

Obviously that didn't happen. Since then the stock has returned 267%. By comparison, the S&P 500 and Dow have tacked on still impressive, but much smaller, gains of 94% and 77%, respectively.

The Downfall of Market-Timers

Market-timers fail because they let emotional input override logical information. That's why the fear of buying right before seeing a stock float back to earth stops them making sound investment decisions.

Do you really want to let your wealth suffer like that? Not if I can help it.

The harmful effects of letting emotion determine your investing decisions have been well-documented. According to DALBAR, the average investor who let emotion guide him saw an annual return of 1.9% in the 20 years before 2009, while the S&P 500 averaged 8.4% annually in the same period.

More recent figures are no better. The latest DALBAR research shows that the average investor saw annual gains of 5.02% for the 20 years leading up to 2014, even as the S&P 500 returned 9.22% annually. That's serious underperformance rooted in emotion.

Investors who shy away from stocks that are pushing yearly highs based just on their price are forgetting one of Warren Buffett's greatest observations: It's better to buy a fantastic stock at a fair price than it is to buy a fair stock at a fantastic price.

How to Determine Real Discounts

None of this is to say that I don't value stocks that are cheaper than they should be. I hunt for them every day, whether the markets are tapping new highs like they are now or plumbing new lows like they were in 2003 and again in 2008.

You just need to know how to recognize the entry points.

Would you recommend a good source of relative valuation statistics (P/E, EV/EBITDA, PEG, ttm, current year, next year, Growth rates, book values, etc.) both for companies and their sectors?