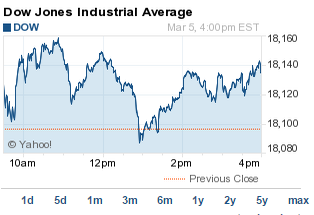 Investors remain cautious about the markets ahead of Friday's U.S. jobs report. Gold prices slipped below $1,200 on the day.

What Moved the DJIA Index Today: The ECB announced it will begin its 1 trillion euro ($1.1 trillion) bond-buying program on March 9 and end it in September 2016. The stimulus package is part of a broader attempt by the central bank to boost stock prices and kick-start its flailing economy. The world's largest economic bloc also released financial forecasts for 2017. Shares of Deutsche Bank AG (USA) (NYSE: DB) were up marginally on the day. (For a breakdown of three ways to profit from the European spending bonanza, go here.)

The Commerce Department announced today that new U.S. factory goods orders slipped for the sixth straight month. The troubling data suggests the manufacturing sector remains weak, raising new concerns about the health of the U.S. economy in the first quarter.

Money Morning Tip of the Day: Facebook stock is a great long-term tech play. It could double by 2018. Today's tip comes from Money Morning Tech Expert Michael A. Robinson:

But I do. And I'm predicting FB stock will double in the next three years.

Facebook has moved beyond its early identity as a social networking site for young people. It's now the indisputable world leader in the social networking market, one that forecasters IBISWorld estimates at $9 billion.

Facebook's total user base now stands at nearly 1.4 billion – that's bigger than the population of China. And Facebook's global impact will keep growing, as half of everyone online now uses Facebook, and more than 60% of the world's 7 billion people have yet to get online.

Facebook is also benefiting from the mobile revolution. In Q4 2014, Facebook had 45 million mobile users active on a daily basis, a 34% increase from the year-ago quarter.

The company is doing a great job turning the mobile trend into money. Mobile ad sales in the quarter represented roughly 69% of total ad revenue, a 30% annual gain.

Over the past three years, it has grown earnings per share by an average of 57%.

To be conservative, let's cut that figure in half to 28.5%. To project how long it will take Facebook to double, we use my "Doubling Calculator" (aka the Rule of 72).

If we divide 72 by Facebook's 28.5% earnings growth rate, we find that profits will double in just about 2.5 years.

Remember, price appreciation follows earnings growth. So, giving Facebook a full three years to reach $161 is both conservative and realistic.

Robinson's full case for buying Facebook stock can be found here: This Leading Tech Stock Will Double by 2018