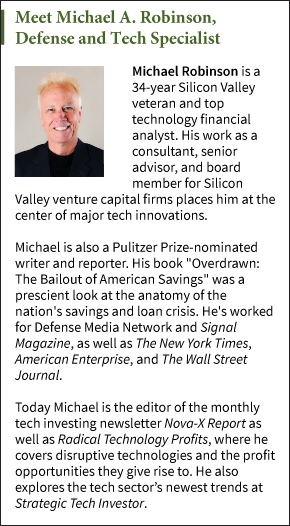 This money-making "Tip of the Day" comes from our Tech Expert, Michael A. Robinson:

But I do. And I'm predicting FB stock will double in the next three years.

Facebook has moved beyond its early identity as a social networking site for young people. It's now the indisputable world leader in the social networking market, one that forecasters IBISWorld estimates at $9 billion.

Facebook's total user base now stands at nearly 1.4 billion - that's bigger than the population of China. And Facebook's global impact will keep growing, as half of everyone online now uses Facebook, and more than 60% of the world's 7 billion people have yet to get online.

Facebook is also benefiting from the mobile revolution. In Q4 2014, Facebook had 45 million mobile users active on a daily basis, a 34% increase from the year-ago quarter.

The company is doing a great job turning the mobile trend into money. Mobile ad sales in the quarter represented roughly 69% of total ad revenue, a 30% annual gain.

Now, here's why the Facebook stock price could double...

Over the past three years, it has grown earnings per share by an average of 57%.

To be conservative, let's cut that figure in half to 28.5%. To project how long it will take Facebook to double, we use my "Doubling Calculator" (aka the Rule of 72).

If we divide 72 by Facebook's 28.5% earnings growth rate, we find that profits will double in just about 2.5 years.

Remember, price appreciation follows earnings growth. So, giving Facebook a full three years to reach about $161 is both conservative and realistic.

Robinson's full case for buying Facebook stock can be found here: This Leading Tech Stock Will Double by 2018

FB has many problems besides cash per share just over $4, book not even $15, balance sheet in decline. It's lost what it needs most. Demographics of real youth! Teens to 20s have dropped by 70% in last two years & FB is nothing but a social media not a company like GOOG. See Myspace to know what happens but a major market correction is soon to take place and once that happens, FB might double from the 5 bucks a share it's going down to but that does no good for longs holding at insane Bubble prices. FB is the worst stock in the market and is certainly no investment. I'd advise going short to 5 bucks. jmo and old time stock trader.

Do the research, and figure it out

Myspace time no wife. No mobile reach. So it is different story now.
All individual and business hooked up with fb and no one around you without FB
go anywhere if they take mobile means first they open Fb
its not fictitious and real
whatsapp
instagram
whats more you want
it is possible to reach that target.
i agree.

FB does represent an amazing oppurtunity for growth…business is only just coming to terms with its understanding of how to use this medium to reach out to consumers and while the youth are migrating to more individualized apps such as snapchat, instagram etc there remains incredible oppurtunity for highly targeted reach at a fraction of the cost of tradtional media.

When you hold such a large pool of users there will naturally be churn in certain demographics, especially youth who have limited attention span.

Currently we are seeing a flourish within the Fb Eco system of businesses looking to capitalize on the oppurtunity that fb advertising represents – this will only grow as business begins to see how the platform can be and should be exploited.

wish i would have bought more at 20 and not sold it at 40… i don't use it but my mom, wife and sister are always stuck to it like glue and when i jump on my wifes i trip on all the diverse unique specific content… it's like a personalized google at this point.

Facebook is different than Myspace in many ways. One is that Myspace never went public and didn't ever have as many users. Also, Facebook the company owns Instagram and WhatsApp, which has a huge young user base and I would expect them to keep innovating and acquiring as they have. That is also a difference between Myspace and Facebook. There were small updates to Myspace here and there, but never in the ways that Facebook has done it. They are constantly updating their platform(s) with features and the latest in technology. They're even getting into the AR/VR industry as of lately. Also the platforms Facebook owns are still the best places to advertise and there is no shortage of ads purchased on Facebook or Instagram which is where the majority if not all of their revenue comes from.