Hundreds of Silicon Valley companies have hit venture capitalists' radar because of their ambitious goal: Invent ways to disrupt the banking industry as we know it.

Banking is one of few industries to have escaped disruption from the digital revolution.

Most of its infrastructure is decades out of date. People still use paper checks, debit cards require PINs, and money transfers take days to go through. Loan applications are filled out on paper and can take weeks to be approved.

Silicon Valley companies are working to solve these types of issues. The ideas emerging from the growing world of "fintech" will change how everyone banks – and will shake up the status quo.

"When I go to Silicon Valley… they all want to eat our lunch. Every single one of them is going to try," JPMorgan Chase & Co. (NYSE: JPM) CEO Jamie Dimon said at the bank's Investor Day last year.

And we're tracking this trend now because at the rate money is pouring into these companies, they're on the way to being the next hot tech IPOs… 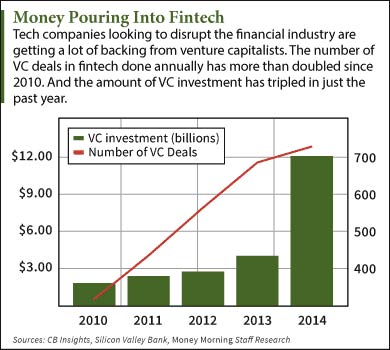 "We have a chance to rebuild the system," prominent tech venture capitalist Marc Andreessen told Bloomberg last October. "Financial transactions are just numbers; it's just information. You shouldn't need 100,000 people and prime Manhattan real estate and giant data centers full of mainframe computers from the 1970s to give you the ability to do an online payment."

It's not going to be tech's biggest names that upend the financial industry. The marquee tech companies have taken seats at the table but so far have shown no desire to saw the legs off.

Instead, the disruptive innovation in financial tech is coming from the startups.

For investors, that presents a challenge since most of these Silicon Valley companies are still private. But fintech-related stocks do exist. We expect more great opportunities to spring up over the next few years as some of the top innovators go public.