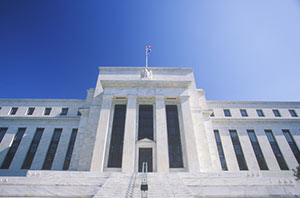 DJIA futures today (Wednesday) forecasted a 44-point increase from the Dow close yesterday. On Tuesday, U.S. stock markets cratered as investors grew nervous about the timing of the Federal Reserve's pending interest rate increase. The DJIA fell 333 points on the day, while the Nasdaq fell another 85 points.

Investors will be keeping an eye on domestic crude inventories, reported by the Energy Information Administration this morning at 10:30 a.m. Analysts project a ninth straight jump in crude stocks in the United States, although the American Petroleum Institute reported an unexpected decline of 404,000 barrels in crude stocks for the week ending March 6. The news will affect crude oil prices today and the broader energy sector.

Investors will also want to keep an eye on China, which is seeing a slowdown in its mighty economy. Even though its data would be the envy of many other nations — industrial output is up 6.8% and retail sales rose 10.7% — the figures are much lower than analyst expectations. Such data will also affect energy prices and global equities.

Here are some of the pre-market movers in the stock market today – including your "Money Morning Tip of the Day" – that you'll want to keep a close watch on to make it a profitable Wednesday:

Money Morning Tip of the Day: Don't listen to pundits warning of a tech stock "bubble." Today's Nasdaq is nothing like it was during the dot-com era. Tech stocks will keep beating the broader market.

Last week the Nasdaq Composite Index crossed the 5,000 level for the first time in 15 years.

The bears say this is proof we're living through another tech-stock "bubble" – and that a collapse like the dot-com debacle of 2000 is close at hand.

But the gloom-and-doomers are wrong. There is simply no comparison between today's Nasdaq and the go-go years of the Roaring '90s.

Second, despite a much larger economy and 15 years of inflation since then, tech stocks are substantially cheaper today than they were in the late '90s.

Price/earnings (P/E) ratios illustrate this. By that stock-value standard, tech stocks today are 81.7% cheaper than they were in the late '90s.

At the height of the dot-com rally, Nasdaq stocks traded at 175 times earnings. Today, that figure stands at 32 – making today's stocks five times cheaper than they were then.

Finally, when we take inflation into account, the Nasdaq is well below its previous high. In 2000 dollars, the index would have to hit 6,908 to have the same value as back then, for an additional rally of 38%.

The bottom line: Tech stocks are nowhere near overheated. There are still plenty of ways to profit.