The Exxon Mobil stock price (NYSE: XOM) hit a 52-week low of $84.03 intraday Wednesday. Shares of the oil and gas giant are sitting at their lowest level in 17 months. 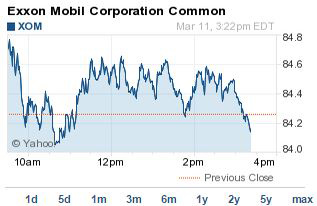 The Irving, Texas-headquartered company has certainly taken it on the chin over the last several months. Indeed, a laundry list of issues plague the stock...

It's Not Just Oil Hurting the Exxon Mobil Stock Price