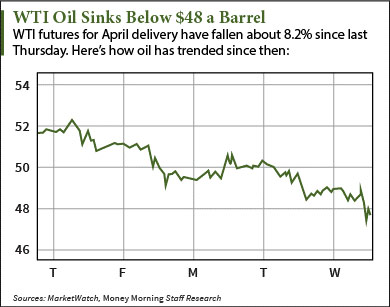 Brent crude prices moved up for the first time since March 5. Futures for April delivery gained 1.02% to $57.45 a barrel.

Make More Money This Year, No Matter What the Market Does… You can make 2015 your wealthiest year in a few simple moves. You just need the three common investing habits to dump immediately, the single most effective strategy for your portfolio, and five stocks to get you started to a wealthier you. Get all of that right now in this exclusive guide…

"Lots of crude – that's been the theme, it's still the theme, I don't think it's going to change anytime real soon," said Kyle Cooper, analyst at IAF Advisors in Houston, to The Wall Street Journal.

If WTI closes below $48 today, it will be the lowest settlement since Jan. 29.

Why Higher WTI Crude Oil Prices Are Ahead

Low oil prices means many operators are shrinking their future production. This will cause a "reserve crunch" that will reverse the oil price slump.

"There's very little reason to continue producing excessive amounts of crude if it's merely going to depress the price," Moors noted. "But this is the kind of crunch that promises to have a big impact on both crude oil prices and stock valuations."

While the reserve crunch stabilizes WTI oil prices, Moors recommends investing in these three oil stocks now. These three companies are trading at a discount and pay regular dividends…