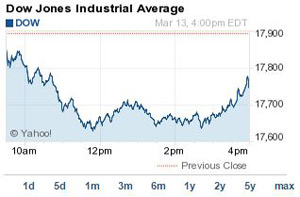 The DJIA Index shed 145 points Friday. The cause? Falling crude oil prices and investor jitters ahead of next week's FOMC meeting.

What Moved the DJIA Index Today: Crumbling oil prices weighed heavily on the markets. The S&P energy index dipped 1.4% intraday after the International Energy Agency said the glut in U.S. production is weighing on the global markets. Shares of Chevron Corp. (NYSE: CVX) dipped 0.78%, while Exxon Mobil Corp. (NYSE: XOM) dipped 0.42%. This was the 12th consecutive decline for the Exxon Mobil stock price.

Investors are increasingly nervous about the Federal Reserve's pending meeting on monetary policy. On February 24, Fed Chairwoman Janet Yellen said the Fed will not raise interest rates for several more committee meetings. However, during her testimony before the Senate, Yellen said the Federal Open Market Committee will consider future rate hikes "on a meeting by meeting basis." Tuesday's event could provide insight on when the decisive meeting could be later this year.

Money Morning Tip of the Day: European Central Bank monetary policy and a falling euro are flashing a strong "Buy" signal for these investments.

These policies will keep downward pressure on the euro. The Eurozone kicked the Greek debt crisis issue four months down the road when it extended its current bailout program. This looming threat of a Greek exit from the euro will smother the currency even more.

But it's also providing strong "Buy" signals for three investments in particular: