The Apple profit margin on its new Watch will outshine even that of the iPhone.

Just how big the gap will be depends on how far Apple Inc. (Nasdaq: AAPL) can penetrate the Swiss luxury watch market with its 18-karat gold "Edition" Watch. 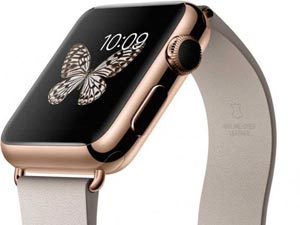 A fat Apple profit margin is the magic that keeps the Cupertino, Calif. company wallowing in money despite not having dominant market share.

In its fiscal first quarter, Apple reported gross profit margins of 39.9%, an increase from margins of 37.9% in the same period a year earlier.

Apple makes money from pretty much everything it does, but amongst its hardware, the iPhone has had the biggest margins.

Morgan Stanley (NYSE: MS) analyst Katy Huberty estimates the profit margin on the current mix of iPhones is a robust 46.7%. Most smartphone makers, by contrast, squeak by with margins of only 2% to 4%.

Why the Apple Profit Margin on the Watch Will Be Huge

Now here comes the Apple Watch. The high-end watch sector is an ideal business for Apple. Typical margins in this sector range from 50% to 75%.

But the gold Apple Edition Watch could skew the average much higher. This model starts at $10,000 and tops out at $17,000. Even when you factor in the cost of one ounce of gold (about $1,150 right now), the Edition should clock in with a profit margin of 80% and up.

And that's right where they should be. Fine gold jewelry generally has a profit margin of more than 90%.

So Apple stands to make a lot of money on every Watch it sells, and an obscene amount of money on the gold ones.

But will it be enough to move Apple stock? Given that the company already rakes in about $40 billion in profit annually, can the Watch have an impact?

Figuring out the impact of the Watch on AAPL stock involves some number crunching. We know enough now to make some good educated guesses.

We already discussed the Apple profit margins on the Watch. So that leaves sales. With that and the margins, we can predict revenue and profits.