It seems there is always a great deal of attention being paid to Apple Inc. (Nasdaq: AAPL).

Today I'm going to show you how Apple can give us a 50% gain – and that will pale in comparison to my backdoor play, which could net in excess of 100%.

I believe that putting Apple in the Dow Jones Industrial Average will help to stabilize its correlation to the market's benchmarks even more.

You see, Apple is acting more and more like a bellwether stock, raising its dividend on an annual basis all the while buying back shares. Apple's equity often moves its own way, regardless of global or regional circumstances.

For example, in the last 200 trading days, AAPL shares moved with the S&P 500 just 12% of the time. Apple almost looks like a defensive play when you think about it that way, and that's exactly what hedge fund managers see.

But along with the move to the Dow comes perhaps the biggest factor in Apple's expected rise: its product introductions…

The announcement of lighter and faster MacBooks is nice, but it's the Apple Watch that is grabbing most of the headlines these days. I can tell you that watch is going to be on a lot of peoples' "Buy" list, including mine.

The stock has peeled back from its closing high of $133 in February to its current price of around $124. The chart below shows us a possibility. 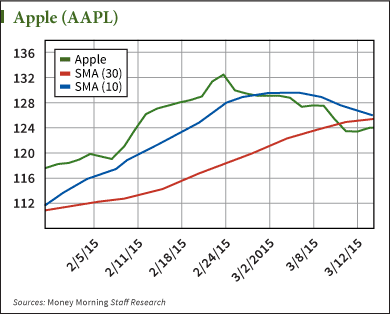 This is a true sign of a stock looking to make a move to the upside. The big question: is there a possibility that Apple stock could see $200 this year?

In that case we are looking at a return on investment of about 50% looking at today's price vs. the target.

But there is a way to take that 50% gain and rocket right past it, even while taking a smaller price bite than the $125 a share it's going to cost you to buy AAPL at today's prices.

How about 80% off, without a margin account? Yes that's right, this is strictly cash, has less out-of-pocket cost and, more importantly, less out-of-pocket risk! Let's first do a quick review, and discuss how we get a contract on AAPL for the rest of the year to buy the stock for $25 a share less than the market price…

Apple has incorporated a marketing pitch into its latest iOS update – something called "forced marketing" and this can push demand for the Apple Watch (which the new iOS touts through a watch-linked app) through the roof.

Anyway, to my mind and analysis this is just one more confirmation that this stock is set to sail to my target of $200 this year.

So the next question remains… how to buy the stock below market price, and make a killing in the end?

First, I admit to owning Apple stock, but I have to agree with the InfoWorld humor columnist, Robert X. Cringely . If you are young and can read microscopic text, then the Apple Watch might work for you. The iPhone, at least, was actually an improvement over the Blackberry, mostly because of the larger screen size. I do not see that with the watch. Frankly, I have enough trouble writing messages on the iPhone (I really miss the BlackBerry keyboard…) In the end, Apple Watch sales will probably be good because the buying masses rarely give thought to actual value… Read more »

How about also explaining the down side to everyone if the target is not reached. I just love how the experts make everything sound so rosy but there are also skunks in the roses.

I don't know how to trade options. I can't wrap my head around them.
Is there a service/brokerage that can do it FOR me at my direction?

So if I understand this correctly I make the purchase of the option. Wait until Jan 16, 2016.
Someone will buy my option to purchase AAPL at $100 because it is $100 below the strike price of $200. When they buy, I get paid. In this example $7,300, which equals 300% gain over 10 months on my money. So I just buy the option, wait and profit if it hits the expected target price.

SET YOUR OWN ALLOCATION So far this year, the most optimistic analyst has only gone so far as to predict a $165/share price target for the high end of the possible price range. Everyone else who subscribes to the possibility of Apple eventually becoming the first $ 1 Trillion Company ( market cap ) has said it may take 2-3 years to get there. Nothing is certain in life, so it may or may not get there in 2 more years, so in the meantime, you have to take some profits when its is convenient for you. If you have… Read more »

Good strategy. A little speculative but that's what puts and calls are for…to leverage
what you THINK is going to happen.

All the author is suggesting is going long AAPL and using a long call option as a replacement for owning the stock. There seems to be quite a bit of misunderstanding regarding options. Kathy and Matt, I'm not sure where you are getting your numbers or info, but you do not have to put up the money to buy the 100 shares of stock at the option strike price when you buy (long) a call option. This is completely incorrect. On a long call you merely pay the price of the call times 100 (for 1 contract – 100 shares).… Read more »

Since it is reported that as many as 80% of buy options expire worthless, that means that 80% of those options provide premiums for the sellers. Even on the 20% that get called, there is still a premium earned by the seller of the option. I use the "sell to open" options on stocks I own in my IRA account to supplement my Social Insecurity checks and make enough to more than offset my annual minimum required distributions. For you youngsters, that means I'm over 70.5 years old!!! Every now and then my stock position gets called, and I receive… Read more »

These incredible amounts. Apple is a really interesting investment. Thanks alot.

When will Apple stock be a a call price again? I want to buy stock. I'm confused as when to buy.