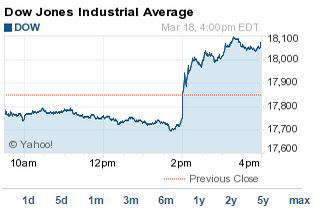 The DJIA Index surged 227 points Wednesday. The cause? The Federal Reserve indicated a slower pace for an expected interest rate hike this year.

Commodities rallied on the news, with gold prices jumping nearly 2% and silver prices up almost 2.5%.

What Moved the DJIA Index Today: In focus today was the conclusion of the Federal Open Market Committee meeting. The markets surged after Fed Chairwoman Janet Yellen signaled that central bankers will not increase interest rates until the nation sees an improvement in its jobs picture and inflation begins to rise. However, the Fed has not ruled out an interest-rate hike for June 2015. The central bank officially removed the word "patient" from its language, signaling that it is growing more prepared to move on interest rates at its discretion.

Money Morning Tip of the Day: Midstream companies are booming, despite low oil prices. And the best way to play the midstream is with Master Limited Partnerships…

West Texas Intermediate fell below $43 a barrel Tuesday morning to hit a six-year low on concerns that a supply glut in the United States is outpacing storage capacity. About 60% of U.S. storage systems are currently full, up from 48% in 2014.

Worries that we could fill all of our energy storage systems are real. But they are also creating profit opportunities for investors.

According to Money Morning Global Energy Strategist Dr. Kent Moors, midstream companies are the "sweet spot" of energy investing. They connect the "upstream" exploration and production companies to the "downstream" retail, refining, and marketing channels. They also provide vital services in transportation, storage, and processing.

Even with falling oil prices, the midstream is booming.

"When you invest in the midstream, you're far less susceptible to price fluctuations in the underlying commodity, and you are able to collect easy profits from the growing demand in fuels," said Moors.

The best way to play the soaring demand for midstream services is Master Limited Partnerships (MLPs). Even in the face of declining prices, these midstream equities benefit from the continued rise in storage, transport, and processing of fuels.

Their "fee-based" model allows them to negotiate long-term contracts. They factor year-over-year prices into these contracts in case inflation occurs down the line. That's how they can sustain their distribution growth for investors amid high interest rates.

To learn more about the benefits of MLPs, and get our favorite MLP to buy now, go here: 3 New Master Limited Partnerships to Watch in 2015