According to Bloomberg Business, people collectively waste an hour a day on Facebook debating everything from Kim Kardashian's hair to the now infamous gold/blue dress.

After last Wednesday, I've got to wonder how much time they're going to blow talking about what Fed Chair Janet Yellen said... or didn't say.

At the end of the day it doesn't matter.

I say that because one of the most fundamental investing truisms of all is that "money moves to where it's treated best."

Simply put, a rise in interest rates is a sign that money is going to be treated better. It's a capital attractor, not the deterrent hyperactive day traders think it is.

The Data Proves It

Let me share some data with you and see if you don't agree.

The chart below demonstrates S&P 500 performance vs. Fed Funds Rate going all the way back to December 1, 1971. 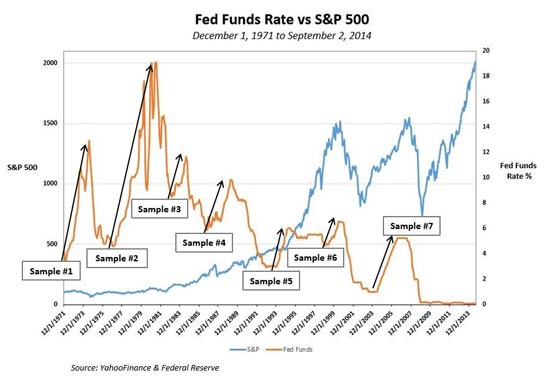 It might be hard to see what's actually happening in that chart above so I've broken it down in the table below based on seven distinct sample periods when the Fed was raising the Fed Funds rates.

Contrary to what people think will happen, history is very clear.

Six out of the last seven periods during which the Fed was raising rates, the markets actually went up - gaining an average 13.47% during the rising rate periods.

In fact, stocks have gone up in six out of the last six periods when the Fed was in a rising rate environment.

You see, love it or hate it, the Fed typically only raises rates when it believes the economy can absorb the increase - and even then, it's usually slow to finally increase rates.

Further, when the time comes, the Fed tends to move in small digestible increments. Then at some point the cycle reverses, the economy goes into a recession, and the Fed lowers rates, again.

Statistically speaking, we come to the same conclusion.

The chart below demonstrates a 90% correlation between Fed Funds Rates and U.S. 10-Year Treasury rates. 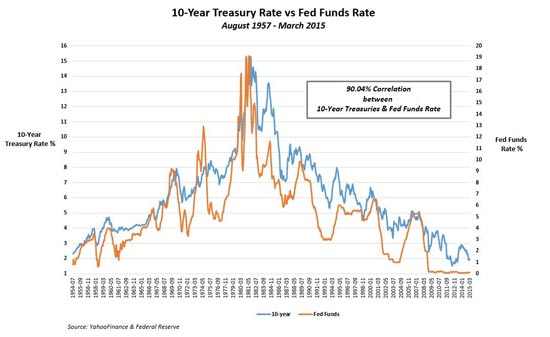 This shows you that there is, indeed, a link between Fed actions and perceived risk.

Which brings us to common sense.

If 10-year rates are "increasing" it's because traders are "selling"... bond yields and bond prices move in opposite directions.

That freed-up capital has to go somewhere. Historically, it's moved into equities.

There's no reason to believe this time will be any different - primarily because there isn't an attractive alternative with enough liquidity to absorb the flow of capital.

At some point that reverses and yields become attractive enough to sway traders out of equities and into bonds - but that's not going to happen anytime soon with the Fed raising the rates in miniscule 0.25% increments.

Critics say that the economy isn't strong enough to withstand an increase. I think they're making a mountain out of a molehill. If the economy does stall out when the Fed raises rates, you can bet they'll reverse course, lickity-split, and bring rates right back down again. At which point, we'll be right back (or at least very close) to where we are now - with historic low rates and traders pushing up equity prices in search of return.

So when the Fed does raise rates - and the inevitable short-term rate riot occurs - we'll use the volatility to go shopping.

Should I wait for another pull back and get long on IWM ?