The DJIA today plunged 292 points. The Nasdaq suffered its steepest one-day decline in almost a year.

What happened? A wide sell-off in the biotech and technology sectors outpaced gains fueled by news of a merger between Kraft Foods Group Inc. (Nasdaq: KRFT) and H.J. Heinz Co. 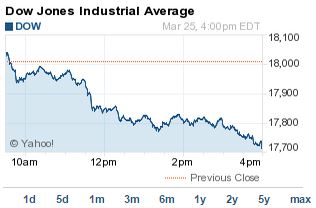 What Moved the DJIA Today: The markets are still jittery about pending monetary policy from the Federal Reserve at a time that concerns are emerging over second-quarter earnings season thanks to a stronger dollar and weakening economic data. Stocks with high earnings multiples like biotech and semiconductor stocks took a hit this afternoon. This morning, the February durable goods orders report registered much lower than expected, signaling that American businesses are not investing as much as needed to grow the economy.

Weakness in the U.S. dollar, geopolitical tensions in Yemen, and news of speculative buying outweighed oversupply concerns in the oil markets. This morning, the Energy Information Administration (EIA) announced that U.S. crude inventories increased by another 8.2 million barrels in the week to Friday, the highest level in 80 years.

Money Morning Tip of the Day: Don't panic when markets are down. Look for profit opportunities instead using these strategies.

People get nervous when markets plunge, but stock market downturns are just a fact of investing. They're very rarely anything more than a short-term adjustment.

Rather than dwell on short-term losses, investors should be on the hunt for opportunities. Here are three of the best ways to profit when markets are down.

No. 1. Buy Stocks on Sale: This is the most obvious way to take advantage of a market downturn. Maintain a wish list of stocks you'd like to buy if they were just a little cheaper. A market downturn is the perfect chance to use such a list.

No. 2. Sell Stocks Short: In short selling, you borrow shares from your broker and sell them at the current market price. The idea is to profit by buying the shares back at a lower price once the stock drops. If all goes well, you return the shares to the broker and keep the difference as profit (minus a small margin fee). Learn more on how to short stocks here.

No. 3. Profit When an Index Falls: A reverse index fund rises when the market falls and falls when the market rises. It's essentially a hedge against any downturn. Options include the Rydex Inverse S&P 500 Strategy Fund (MUTF: RYURX), which tracks the S&P 500 and rises 1% for every 1% the index falls, and the ProShares Short Dow30 ETF (NYSE Arca: DOG), which tracks the Dow Jones.

Finally, prepare your portfolio ahead of any market downturns by using trailing stops. This tool limits losses, be they from a single lousy earnings report from a company or a stock market crash.

Make More Money This Year, No Matter What the Market Does… You can make 2015 your wealthiest year in a few simple moves. Find out how in this exclusive guide…