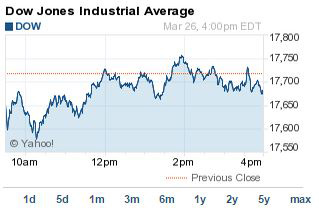 The DJIA today managed to bounce back from early triple-digit losses but still closed down 39 points. The S&P 500 struggled to its fourth-straight daily decline.

Investors brushed aside concerns about a pending interest-rate hike by the Federal Reserve and jitters over the upcoming earnings season.

Investors wondering why crude oil prices are rising today should look to geopolitical tensions in Yemen. Saudi Arabia is leading a coalition of five Gulf States and Egypt against rebels in Yemen, news that is sending commodity prices much higher. Gold prices and the Japanese yen rose against the dollar, while Brent crude oil prices surged due to concerns over supply disruptions in the Middle East.

Money Morning Tip of the Day: The Facebook stock rise is far from over.

In the past year, Facebook stock has gained 23%. That's almost three times the 8% gain of the Dow Jones in the same period.

But the Facebook stock price will head even higher.

The consensus forecast among 57 analysts covering FB stock is widely bullish, according to a recent Thomson Reuters poll.

The Wall Street Journal shows 40 analysts currently rate Facebook "Buy." That's up from 38 a month ago. Five maintain an "Overweight." Six have a "Hold." Just one rates FB a "Sell."

The 43 analysts providing Thomson Reuters with a 12-month price target have a median target of $91. The high estimate is $107; the low estimate is $65.

Money Morning Tech Specialist Michael A. Robinson was ahead of Wall Street when he predicted on Feb. 27 that Facebook stock will double to $161.36 in three years.

Robinson pointed to Facebook's indisputable role as the world leader in the $9 billion social networking market, which grew by 36% a year between 2009 and 2014.

He also cited how the firm has matured into a "mobile juggernaut," rapidly increasing its mobile active users (745 million in Q4 2014) and deftly turning the mobile trend into money. Mobile ad sales in the quarter represented roughly 69% of total ad revenue, a 30% annual gain.

Facebook's new initiatives and strategic acquisitions are yet another tailwind for its stock price.

"Facebook still offers investors plenty of upside," said Robinson. "Even better, it's a big-cap firm, so it should remain less volatile than the overall market. That makes Facebook a great long-term tech play that can really improve the value of your portfolio."