The DJIA Index added 33 points Friday to end a four-day losing streak. The cause? Biotech and healthcare stocks rebounded to pull markets upward as investors search for value after this week's sell-offs.

Federal Reserve Chair Janet Yellen gave a speech on monetary policy in San Francisco 15 minutes before the closing bell. Yellen indicated that rate increases this year are likely, but the pace will be gradual. 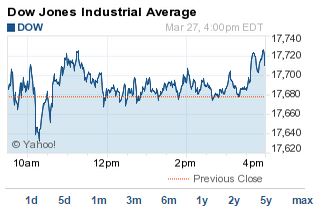 What Moved the Stock Market Today: The Nasdaq Biotechnology Index (Nasdaq: NBI) jumped more than 1.7% on the day after four consecutive losing sessions. Meanwhile, economic data released today came in lower than expectations. Consumer sentiment fell month-over-month in March. The U.S. Commerce Department stated that the final reading for GDP in the fourth quarter of 2014 came in at 2.2%, lower than economists' projections of 2.4%. This raises concerns about economic momentum heading into the first quarter of 2015.

Energy stocks were the worst-performing sector as oil price volatility continues to hammer markets. Crude prices slumped as analysts dismissed concerns about violence in Yemen and the markets took into consideration the very real possibility that the United States could announce a nuclear arms deal with Iran in the next few days. Brent oil fell 5.3% today as speculation grows that Iranian production could reenter the market in the coming months. Oversupply concerns also continue to pound the U.S. energy sector. May 2015 WTI crude futures contracts fell nearly 6% on the day.

Money Morning Tip of the Day: Reinvesting dividends is a powerful wealth builder.

Reinvesting dividends is the practice of buying additional shares of a stock using the dividends themselves to pay for your purchase. It results in long-term compounding, and that's key to building a fortune.

Let's use Altria Group Inc. (NYSE: MO), a high-yield dividend stock, as an example. Last September, Altria boosted its dividend for the 48th time in the last 45 years. Shares yield 4.11%.

While that's fabulous for any investor, some have made out like bandits. Depending on when they originally purchased shares, they've had the chance to receive more in dividends than they originally paid for the stock itself. Which means, practically speaking, they own the stock for "free."

Over time, the difference between simple appreciation and the effects of continual dividend reinvestment is jaw-dropping. 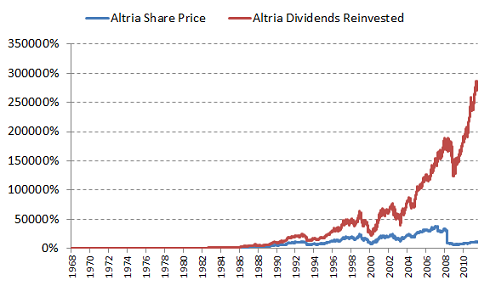 Many companies even offer dividend reinvestment plans (DRIPs) as a means for investors to purchase shares over time. Investors can start with a small number of shares and, instead of receiving dividends as cash, reinvest continually in the company's stock.

This achieves two things. 1) It puts the plan on autopilot, and 2) it helps you maximize the effectiveness of dollar-cost averaging over time. You spread your purchases out and never have to lift a finger to do so.

The DRIP strategy isn't a get-rich-quick tactic. But for investors with an eye toward the long term, its power is unrivaled in transforming modest investments into mega-returns down the road.