The worsening crisis in Yemen has provided a stark reminder of the immediate impact geopolitical events can have on oil prices.

I was asked to provide my analysis on CNBC's "Closing Bell" on Thursday afternoon, and to discuss the impact the crisis will have on oil prices.

Because this crisis is already having a big impact on the price of crude...

By mid-morning on March 26, West Texas Intermediate (WTI) had risen over 6% in less than 18 hours. Meanwhile Brent was up more than 5%, and was showing signs that it might be accelerating.

Behind this dramatic jump in price was the initiation of Operation Decisive Storm - air strikes against Houthi rebels in Yemen by Saudi-led coalition forces.

As reported by Saudi-owned Al-Arabiya TV, the coalition includes aircraft from the United Arab Emirates, Bahrain, Kuwait, Qatar, Jordan, Morocco, and Sudan, while Egypt, Jordan, Sudan, and Pakistan were ready to take part in any ground offensive. As part of the offensive, the United States was providing "logistical and intelligence support."

Some of these airstrikes were directed at the Al Anad air base in southern Yemen's Lahij Governorate, which was captured by rebels last week. Until a few months ago, this was the base the U.S. used to launch counter-terrorism operations in the region, especially against ISIS in Iraq. 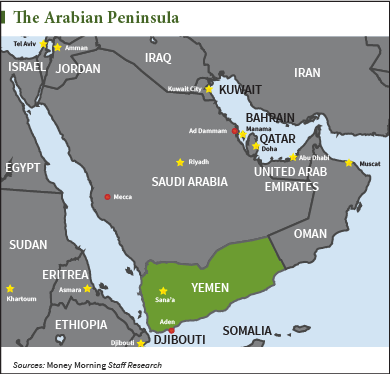 But how quickly things have changed since then...

As it stands, the immediate impact on oil trading routes has been minimal. Yemen is located at the southwestern tip of the Arabian Peninsula at the entrance to the Red Sea, and a short boat ride from the Horn of Africa (hardly a stable place itself these days).

Given its location, little direct oil traffic moves north from here. The primary Saudi East-West Petroline oil pipeline connects to Yanbu on the coast well north of Yemen. About 5 million barrels a day travel via that route.

As you can see, the Saudis do have an extensive border with Yemen, and they have been moving troops to points along the border over the past few days, leading to speculation that ground forces may be next. The Yemeni port of Aden is currently under siege, and the current president is either in hiding or has already left the country.

Following the Arab Spring two years ago, Abdu Rabbu Mansour Hadi took over the presidency from long-time strongman Ali Abdullah Saleh. Saleh has the support of the Houthis, and they now control most of the country's military, including the air force.

That makes the U.S. and regional response much more difficult. In fact, the situation has all the hallmarks of a bloodbath just waiting to happen.

This Could Get Much Worse

Great insight! Now, how exactly am I supposed to invest my money to take advantage of this potential windfall?

Given the responsibility the President of the United States has in terms of maintaining balance in the area we have under the current administration devolved into a confused mass of combatants that are engaged against common enemies and at the same time in conflict with religious factions in a three way or multi faceted conflict a situation that endangers all of the west! President Obama has alienated his allies confused his friends and allowed enemies freedom of action that would otherwise hold them at least in limbo! the departure of the current USA administration from international affairs cannot come too soon!

Too bad the USA doesn'tt like buying Canada's oil.

Canada can produce more than enough oil to supply all of North America for over 100 years. There would be no need for the USA to import any OPEC oil, and no need to get involved in middle east conflicts.

But President Obama and enviro-groups prefer to buy OPEC oil instead of lower priced oil from Canada.

Josephus
Reply to  Robert in Vancouver

The US buys energy and other "stuff" from countries that accept paper money certificates. Canada has more than enough of US fiat money and cannot afford to have a foreign currency burse overbalanced with $US. Saudi Arabia has a defense pact with the US dating back to the Kissinger years with President Tricky Dick. Those were the days !! Now the Saudis are converting all their GOLD holdings into 99.995% purity so as to be Swiss approved for international transfers. They are using the $US certificates to buy other currencies while the $US is still up. GOLD has still to go down, but until then we are hunky dory. The US Reserve is also buying GOLD on the sly…slowly….slowly, while allowing GOLD ETF's etc to sell Gold Certificates worth close to 0. When the big bang theory comes to fruition, the US will remove the Dollar and replace it with the Fed. If you have $$$ better change them into something material with some shine to it!

It is shameful that Obama and his Hollywood/enviroalarmists are not telling the American people that although current domestic production has soared due to fracking current output will not last as fracked wells deplete very, very quickly compared to conventional ones. When the USA needs oil at that point perhaps the Canadian oil will not be available being all tied up by China.

This is the most shallow view of the global oil market I have seen in some time. This guy is an expert?

Right, the framework agreement with Iran was announced what, three days after he said expect no further progress on the talks with Iran. Not exactly the prognostication to distinguish yourself. That's about as accurate as a weatherman.