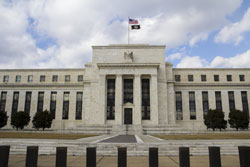 S&P futures today (Tuesday) forecasted a 9-point drop from yesterday's S&P close. Similarly, Dow Jones futures slid 80-points after soaring 263 points by the Dow close yesterday. This came on the back of several key deals in the healthcare sector and big gains for energy stocks.

S&P futures today are moving in anticipation of January's Case-Shiller housing index will be released as the U.S. housing market attempts to rebound from year-over-year lows in November. In addition, chatter about a potential hike to interest rates in June is heating up. In a speech this morning to the Greater Richmond Chamber of Commerce, Jeffrey Lacker, the president of the Richmond Fed, announced that he anticipates strong growth and higher inflation in 2015. These factors are why he would urge the Federal Reserve to boost interest rates as soon as June. Today features three presentations from Federal Reserve presidents.

On the global front, Eurozone consumer inflation will headline a slew of critical data, while German announces its March unemployment level and the U.K. reports a revision of its GDP.

Here are some of today's pre-market movers, as well as what else you should know about the stock market today - including your "Money Morning Tip of the Day..."

Money Morning Tip of the Day: Not every special situation or "turnaround" play will be profitable. But these three catalysts all point to a company's successful turnaround.Today's tip comes from Money Morning Tech Expert Michael A. Robinson:Investing in companies that are in the midst of a turnaround can be risky. You have to be willing to put your hard-earned money into companies with steep losses. And not all can succeed and produce big gains for investors.

Here are three tell-tale catalysts that can help you find these big-profit stocks.

No. 1. A Solid Recovery Starts at the Top. I like to see fresh blood at the top for a simple reason: When companies get into trouble, it often follows from a series of bad decisions by senior management. So, if the company needs to go in a new direction, that requires execs who will bring in new ideas and approaches with them. If a board of directors isn't willing to change leaders, it isn't serious about righting a sinking ship.

No. 2. The Company Must Find New Growth. To convince key customers, lenders, and investors that it has embarked on a new direction, a once-troubled firm has to offer more than just lip service. It must have something new to deliver. This can include new products, markets, or ways of doing business.

No. 3. The Company Must Improve Its Financials. In all the years that I've analyzed turnaround firms and their stocks, I've yet to see one that didn't need at least some improvement in its balance sheet. Of course, we like to see lots of new sales. But if the firm can't improve its cost structure, sooner or later it's going to end up in financial trouble.

Robinson shared a company that meets all three of these criteria, and its stock could soar 50% in less than three years. Get it here: How to Find Tech Stocks Ready for a Turnaround