The stock woes for International Business Machines Corp. (NYSE: IBM) have been long and painful. IBM stock has fallen 22% in the last two years.

So the question now is: when will IBM stock rebound? And how?

There are a number of initiatives that look like IBM stock catalysts, including IBM's moves into cloud computing, business analytics, security, and mobile. 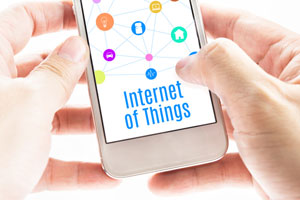 But so far, they haven't moved the IBM stock price.

That's the case with the IBM stock price this morning (Tuesday). It was down about 1% despite the announcement of a new four-year, $3 billion initiative to establish an Internet of Things (IoT) division.

For anyone who doesn't know, the Internet of Things is one of the biggest technology developments we've ever seen.

"The Internet of Things is kind of a new high-tech reality where almost everything is 'connected' and able to communicate," Money Morning Executive Editor Bill Patalon said. "In essence, what we're looking at is a kind of big 'Super Internet.'"

Patalon said there are several opportunities for innovators in the IoT space that include, "wearable tech like smartwatches and intelligent glasses, special monitoring sensors that could signal when an airline pilot or a long-haul trucker starts suffering from fatigue, 'smart shirts' that can monitor your health and report right to your doctor..."

And those are just a few of the opportunities. The IoT is going to be big. And it's going to spark a "land rush," Patalon said, for companies who want to get a piece of this huge shift in tech.

So how does IBM fit into the IoT picture?

IBM's IoT initiatives are all aimed at enterprises. So they aren't going to be rolling out smartwatches or Google Glass-like products.

IBM's vision is one where all the data generated by the devices within IoT - smartphones, tablets, connected vehicles, and any other product that will come out of this IoT revolution - won't go to waste.

"IBM estimates that 90% of all data generated by devices such as smartphones, tablets, connected vehicles and appliances is never analyzed or acted on," Edward Barbini, vice president of corporate communications at IBM, wrote to Money Morning in an email. "As much as 60% of this data begins to lose value within milliseconds of being generated."
In short, it's more or less an expansion of IBM's Big Data push. Through Big Data, IBM wants to help its enterprise clients harness a seemingly infinite amount of structured and unstructured data sets to find patterns and behaviors.

This analytics model can applied to several other businesses in several other industries looking to extract value from heaps of data.

The IoT initiative is aimed at tailoring these Big Data strategies to the yet an even bigger pile of raw data generated through the growing number of connected devices.

So will the IBM stock price rebound through its IoT approach? Not right now - but what's important for investors to understand is that this announcement represents an important step in helping IBM stock through this painful transition....

IBM stock is currently in trouble because 103-year-old IBM is in transition. It's moving from an enterprise services company built around legacy hardware and software to one built around an IT landscape moving toward cloud computing and Big Data.

"I don't think the market knows what the endgame is yet, which is always a bigger problem for a larger firm," technology analyst Rob Enderle of The Enderle Group told Money Morning. "The smaller firms, we forget, a lot of them fail along the way and we remember the ones that survive. With the big firms, it has to survive; it doesn't have the option of failing and reemerging as another company. It has to morph."

While IBM's IoT news is exciting - especially since it shows that IBM plans to grow across its strategic initiatives - it's not enough to suggest that the pain of transition is going to be any less daunting in the near term.

But what does make this IoT push exciting is that IBM is piggybacking off its other strategic growth areas.

We already talked about how this $3 billion plan integrates Big Data and mobile. But cloud too is an important aspect of it.

Along with this announcement, IBM highlighted where cloud strategies fit in. One example IBM discussed in its release today was creating cloud-based products for insurance companies that gather data from connected vehicles and help them fashion "more dynamic pricing models."

IoT is also becoming a part of IBM's flagship Platform-as-a-Service (PaaS) product, BlueMix - which allows businesses to create applications through a cloud interface.

It's too early to recommend IBM as a "Buy." But, if through this transition IBM can parcel out its growth initiatives from its legacy businesses, cut away at the slow-moving IBM bureaucracy, and navigate the changing IT landscape in a more nimble manner than it has in its past, a new IBM could emerge.

The Bottom Line: IBM is still a "Hold." Right now it's too messy, and while IBM sounds to be moving in the right direction, there's little evidence to suggest the massive, old, and stodgy IBM is being replaced by one more nimble and receptive to evolving enterprise tech trends. But we'll be watching IBM stock to see if the company is able to turn its new investments into investor gold...

IBM Isn't the Only Tech Company Working on a Turnaround... Money Morning Defense and Tech Specialist Michael Robinson has just identified what he calls a "turnaround play" - a company with steep losses - that has potential to reverse past financial troubles. Robinson has been screening this company for a while, and he sees it soaring 50% in the next three years...