For April 2, 2015, here's how the stock market did today, the top stock market news, and stocks to watch based on today's market moves… 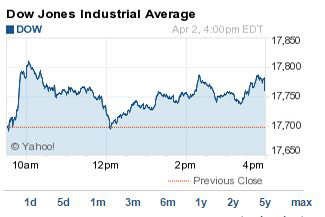 Every day we give investors a "tip of the day" to find their best profits. Today's tip comes from Money Morning Executive Editor Bill Patalon:

China's Internet sector has a big long-term upside. And so does the KraneShares CSI China Internet Fund (Nasdaq: KWEB), an exchange-traded fund (ETF) that's focused on the sector.

We first recommended the KraneShares Fund last summer as a "backdoor" way to profit from the massive Alibaba Group Holding Ltd. (NYSE: BABA) IPO in September. The KraneShares Fund has devoted 7.75% of its holdings to Alibaba – or nearly 95,000 shares.

BABA shares have fallen about 33% from their peak at $120 last November on the back of worries the company is spending a lot on acquisitions. And with such a large stake in Alibaba, KWEB has been hit by that sell-off.

But that stake in Alibaba also serves as a long-term opportunity. Alibaba's growth numbers are rock-solid. Earnings increased 80% last quarter. Gross merchandise volume (GMV) was up 49%.

The company's mobile base is growing, too. It hit 265 million monthly active users last quarter. That's a yearly increase of 95% and a quarterly increase of 22%.

In sum: Alibaba is a great long-term play. And so is the KraneShares Fund.

Because KWEB is not a "pure play" on Alibaba, it won't rise as much as BABA stock itself when it rebounds (all else being equal).

But it will benefit, nonetheless. And it also poses less risk in the interim. For instance, while BABA shares are down by a third from their highs, KWEB has actually posted a gain.

The KraneShares Fund is the kind of investment folks should look to incrementally add to when they have extra cash or when the price is down – and look to hold for a number of years to maximize profits.

Bill Patalon is a 30-year veteran analyst of business and financial markets. He shares his exclusive stock picks and investing insights every single day in his Private Briefing newsletter. Find out how to subscribe here…