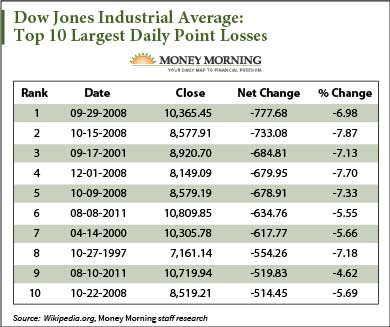 In 2008 alone, the DJIA suffered five out of its top 10 largest daily point losses in history - it sank 429 points in just five minutes on Sept. 29, after the U.S. House of Representatives failed to bail out $700 billion in bank debt. Shortly thereafter, the Dow plummeted 18% (1,874 points) in a week starting Oct. 6.

It wasn't just the stock market that plummeted:

To blame was a systemic breakdown that encompassed Wall Street and Washington.

We like to call it the "Washington-Wall Street Corruption Corridor." The power players in politics and finance - some earning millions in salary and commission - together set into motion a stock market crash that wiped out more than $2 trillion of Americans' retirement savings.

And these ten players had key roles...

Mozilo served as cofounder and CEO of Countrywide Financial Corp. He's now widely regarded as the poster child of corporate misbehavior that led to the 2008 U.S. stock market crash.

You see, Countrywide sold millions of mortgages to homebuyers with less-than-pretty credit histories. In fact, it was the largest sub-prime mortgage lender in the country.

Besides convincing millions of Americans to purchase sub-prime mortgage loans, Mozilo greased the political wheel with "VIP programs" under which he offered certain politicians and government officials special mortgage rates.

His hard work paid off. Mozilo earned a reported $470 million in salary and other income during the housing bubble. He unloaded $141 million in Countrywide stock options prior to the company's share price collapse. While execs like Mozilo cashed out, the company's shareholders hemorrhaged - Countrywide investors suffered a more than $25 billion decline in market capitalization.

Mozilo didn't escape the crisis totally unscathed. On Oct. 15, 2010, he settled with the SEC for securities fraud and insider trading. He paid $67.5 million in fines - the largest settlement by an executive connected to the stock market crash.

Mozilo never admitted to any wrongdoing and was never pursued criminally.

Meanwhile, Bank of America Corp. (NYSE: BAC) acquired Countrywide in a fire sale in 2008 for $4 billion - a costly mistake. The bank paid a record-breaking $16.65 billion settlement in August 2014 over allegations it, via Countrywide, tricked investors into buying subprime loans.

In 2008, three of the largest American investment banks fell, and Lehman Brothers was the first to go. It filed for Chapter 11 bankruptcy protection on Sept. 15, 2008 - the largest in U.S. history at $613 billion in debts outstanding. 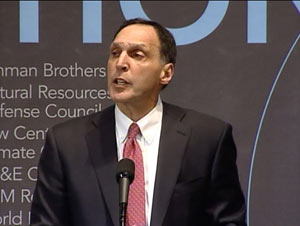 Dick Fuld, the "Gorilla" on Wall Street, was the man in charge when Lehman folded. He'd gotten the company into large positions in subprime mortgages. It even made its own subprime loans. Lehman passed on that toxic debt by the billions to investors in the form of bonds.

Once his methods began to unravel, Fuld failed to recognize his firm was in trouble and take steps to prevent it. He rejected offers from Warren Buffett and others to inject capital or merge. In a 2009 book A Colossal Failure of Common Sense, author Larry McDonald (a former senior Lehman Brothers trader) said Fuld required the firm's chief risk officer to leave the boardroom during key discussions.

In the first half of 2008 alone, Lehman's share value dropped 73%, and the company was forced to sell off $6 billion in assets.

This next stock market crasher said it was a "mistake" to push people to buy housing they couldn't afford - but said it about five years too late...

He paid $67.5 million in fines "Mozilo never admitted to any wrongdoing and was never pursued criminally." – Why was he fined then? Can't get fined for doing nothing wrong?

Greenspan may have been a 'con man' but those who are there now, are just as bad. They [top six US banks] are sitting on a $700 trillion pile of Derivatives, that are about to become worthless! So much so, they are running around Europe and Middle East looking for a war to hide the 'crash' behind!

Thanks for reading, Bill!

Mozilo settled out of court for $67.5 million. That's something you'll see a lot of people/companies do specifically so they DON'T have to admit fault (or have fault proven in a court of law).

It is with great sadness that I have to say this: When Tricky Dick was President, the world was turned upside down. He had to fix the US debt by doing a deal with the Saudis and asking China for a hand. Almost 50 years on and it seems that the US still has not learned it lesson. There is a war on but it is the politicians against the workers and the workers are loosing. It is only when ALL workers push back against the unscrupulous politicians and their bankers that WE will have some rest. Islamisation of the west is the tool most of the western world are using to keep us out of focus. Let Islam come and do its thing, and then let the politicians suffer for their blunder by the same islamists who they prefer. DO NOT FIGHT THE POLITICIANS' WAR. LET THEM SUFFER. MAKE THEM SUFFER. MAY GOD BLESS AMERICA BUT NOT THEIR POLITICIANS.

It is not useful to blame guys while you have retirement funds . What most of you probably DON'T know about is that you can sell shares in your IRAs, Keoghs, 401K, etc without penalty or tax owed as long as you do not make any cash withdrawls . It is a simple advice you can take to protect your nest eggs from the silly blame game that may begin once again. The real blame goes to the greater fool who are no longer buying anymore for the time being which mean that your retirement funds will fall in value. Blaming is not going to save your nest eggs one way or another. Your challenge is to figure out when the next stock crash will come around the corner and sell shares just in time. Chances is that you will not succeed so if you are currently enjoying wonderful gains with all those Netflixes and Apples in your funds, why stay greedy or so called holders ? Your retirement funds are not federally insured because they are not your saving accounts.. They are your risk accounts nothing more or less. Retirement funds are risky and we act as if we don't know that.. Does this make you feel rather funny in your bones yet? I am not going to tell you when to sell or not, because I don't know when is the right time to do so. It is a matter of individual's own financial strategies and goals as well as preparation. Your retirement funds are not protected at all, to say the very LEAST!!! They aint!