Lately the six-year bull market has been looking tired. Despite a lot of volatility, stocks overall are flat on the year.

Meanwhile, the Dow Jones Industrial Average and the Standard & Poor's 500 are both within 3% of their all-time highs.

The question is whether the markets are taking a breather before moving on to new highs or whether they're just out of breath.

The big picture trends say this market is sucking wind.

For investors, the strong possibility of a U.S. stock market crash in 2015 calls for an adjustment in strategy. At minimum investors should choose stocks in "must-have" businesses instead of "nice-to-have" businesses. And they must remember to use trailing stops.

The problem equities are starting to have - and the reason a U.S. stock market crash may loom on the horizon - is that there's not enough money around to push stock prices higher.

Not so much the money to buy stocks. There always seems to be plenty of that. But value is driven by profits, which requires sales. And Americans don't have as much money to spend as they used to.

These charts illustrate what I'm talking about... 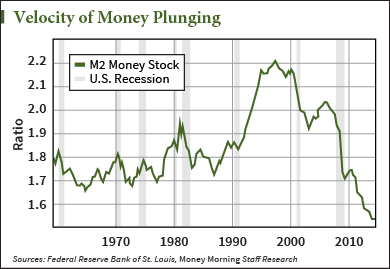 That tells us that people have become less and less willing to spend their money. This makes sense during a recession. People often get anxious they won't have enough money, so they're more reluctant to part with it.

Bu this trend hardly slowed after the last recession. Nervous about the economy, Americans have not returned to their spending ways.

And there are several good reasons for that...

While I see that the author has presented an interesting scenario for a 2015 crash, I don't believe that the crash is imminent. So many forces, such as the Federal Reserve and politicians will do whatever it takes to keep the economy from crashing, even if we sputter along with little or no growth. Other countries, even weak ones, can have an influence on the U.S. economy. QE policies are just beginning in Europe. Japan is continuing large asset purchases. China is still growing at approximately 7%, though down from 10%. These three factors can help the U.S.

This jittery market mirrors the months leading up to Nov. 2008 when the first crash occurred, followed by a second drop in March 2009.
I predict (as do others) that the Dow, Nasdaq and Amex will fall 25% or more in 2015.

I heard that there are "must have" stocks to prepare for the possible crash. What are these stocks?

Best energy stocks to invest in 2015!