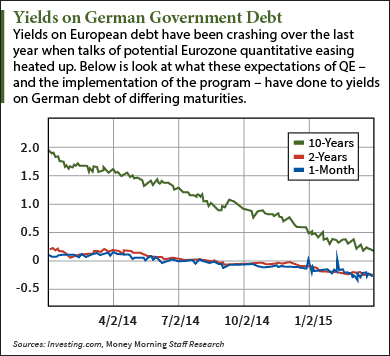 The hunt for yield in Europe is positioning a certain bond ETF for big gains.

Right now, Eurozone government bonds are a no-go. Yields are crashing all across the continent and the profit opportunities are drying up. This will only be made worse as the European Central Bank carries on with quantitative easing.

The yields on 10-year sovereign debt are already outrageously low. So low, in fact, that those countries once devastated by the Eurozone debt crisis - including Portugal, Ireland, Italy, and Spain - are all considered a safer bet than the U.S. government.

The yield on the 10-year U.S. Treasury is 1.855% right now. But even Portugal, a country whose banking system was shaken last summer by the split-up of its second largest lender, has yields at 1.704%. Ireland, the second country to receive bailout money after Greece during the Eurozone debt crisis, has 10-year yields at 0.772%.

This isn't necessarily because these governments' debts are a safer bet than the United States, however. It's because of Eurozone QE.

Through this program, the ECB and National Central Banks will purchase 50 billion euros a month in member banks' government debt. This on its own should help to put downward pressure on yields.

But it's been happening for a while, in anticipation of the program.

Whispers about QE emerged early last year as disinflation began to take hold in the Eurozone.

Investors assumed that ECB President Mario Draghi would at some point begin large-scale asset purchases, and they wanted to get ahead of the central bank government bond demand.

So they started purchasing.

They assumed central banks would be scouring the secondary markets for these bonds, so investors could turn around and sell them to the central banks once QE took hold. And they were right.

These investors got in while yields were higher. Now that they're careening, the value of these bonds is heading up, and they're making capital gains on Eurosystem purchases.

But this trade is slowly losing its profitability.

Now that yields have fallen so far, investors will be looking elsewhere to chase yield.

And here's the bond ETF that stands to gain...

… h! friends,
about euro zone to the west, arab world to the centre enjoy their destroying forces within & abroad, while pacific with north of america & a few others tried/ trying since WHEN?… to save our earth?

Ques; What's the other BIG boys in the world doing?