For April 7, 2015, here's how the stock market did today, the top stock market news, and stocks to watch based on today's market moves… 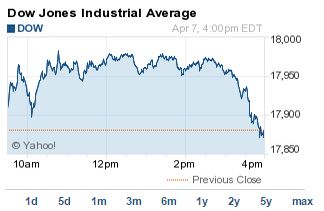 The DJIA Index retreated sharply during the last 30 minutes of a busy trading session, erasing an earlier gain of more than 100 points. The sell-off comes the day before earnings season kicks off and the Federal Reserve releases minutes from the most recent FOMC Meeting.

Healthcare stocks were the best performers from the S&P 500, as biotech shares shook off four consecutive days of losses. The Nasdaq Biotech index (INDEXNASDAQ: NBI) and the iShares NASDAQ Biotechnology Index ETF (Nasdaq: IBB) added nearly 1% on the day.

Every day we give investors a "tip of the day" to find their best profits. Today's tip comes from Money Morning Tech Expert Michael A. Robinson.

Spun-off companies usually beat the market by double digits for up to three years. Here's a spin-off play that could pay off even more…

I love corporate spin-offs. It's like getting two stocks for one, and research shows the spun-off company typically outperforms the market for two to three years.

But when eBay Inc. (Nasdaq: EBAY) spins off its PayPal division later this year, the profit potential will be even greater. Here's why….

First, the more disruptive the technology, the more likely the spun-off firm will both outperform its parent and smash the overall market.

PayPal has long been a leader in digital transactions. And it's making big moves in the rapidly growing mobile payments industry, expected to hit $1 trillion in transactions in as little as a decade.

Mobile payment volume at PayPal in 2014 was just 20% of its total. But we can expect that percentage to grow as PayPal continues to innovate its "mobile wallet" and make strategic acquisitions.

Second, PayPal is setting itself up as one of the go-to firms in the mobile payments industry. That makes it a big takeover candidate.

By investing in eBay now, you get two things. First, you get the parent company – a solid long-term e-commerce play.

Second, you will automatically get shares in PayPal, a rapidly growing firm with strong ties to what could be the tech story of the year – mobile payments.

That gives your portfolio both a solid foundation and a bonus stock that will give us maximum profits.