The gains came after data provider Genscape Inc. reported supplies in Cushing, Okla., fell by nearly 300,000 barrels between March 31 and April 3. This marks the first time since December that Cushing – the key delivery point and storage hub for the WTI futures contract – has seen a reduction in inventory.

That's just the beginning. U.S. stockpiles are projected to keep dwindling this year, leaving plenty of room for prices to recover. 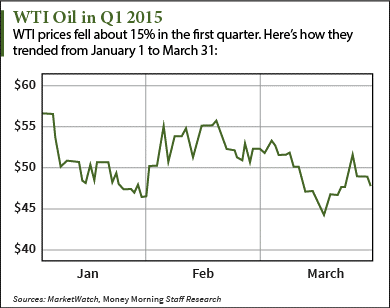 Oil prices are coming off of a bad first quarter. WTI dropped about 15% during the first three months of the year while Brent fell about 6%. Prices were their lowest since the financial crisis as supply skyrocketed to levels not seen in 80 years.

But this week's rally illustrates the strong rebound oil will have in the second quarter and beyond.

"Probably the most encouraging sign for oil prices is that supply drawdown," said Joseph Tanious, principal and investment strategist at Bessemer Trust, to The Wall Street Journal. "But I'd want to see more confirmation of that – that it's happening in a sustained way – before we call a bottom."

Money Morning's Global Energy Strategist Dr. Kent Moors says that's exactly what we're going to be get. Because unconventional wells only produce for an average of 18 months, U.S. production will decline by mid-summer.

That – combined with reduced drilling and M&A activity – will eventually draw down the supply glut. Demand will eventually outpace supply and prices will have nowhere to go but up.

"I do believe oil prices will climb significantly by late August," Moors noted. "Assuming there are no geopolitical 'wild cards' that cause prices to spike higher, I believe oil will trade in the low $80s range by the end of 2015."

How to Play the Oil Price Forecast 2015