Sen. Rand Paul (R.-KY) has announced his bid for presidency. Paul released a YouTube video prior to his declaration, stating that on April 7, 2015, "one leader will stand up to defeat the Washington machine and unleash the American Dream." 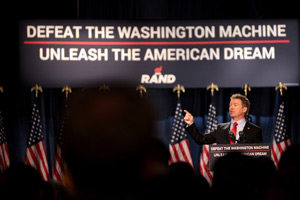 This assertion was also his soon-to-be campaign slogan - one that is just as unconventional as Paul himself. In fact, as a Midwestern Tea-Partier, Paul is notorious for bashing the government by openly criticizing its current policies and programs. Sen. Rand Paul's conspiracy theories have been the talk of the Internet for years.

For example, on April 7, 2014, Paul accused Dick Cheney of advocating for the Iraq War for financial benefit. The media reaction was swift and surprised. But Mother Jones pointed out that Sen. Paul has been a longtime critic of the millennial Bush era for years, arguing that the war in Iraq was based on greed, not patriotism.

Also in 2014, Paul described how former CIA Chief George Tenet admitted that 9/11 was an inside job.

This theory of Paul's regarding 9/11 was not new. In fact, part of what Paul is well-known for is his conspiracy-theorist approach to politics. From his obsession with the mysterious Bilderberger Group to his close relationship with conspiracy-theory radio host Alex Jones to his recent push to audit the Fed, one thing is certain: the Kentucky Senator questions everything in Washington...

Here are four of his most controversial conspiracy theories...

Rand Paul Conspiracy Theories No. 1 - Dick Cheney pushed for the Iraq War to benefit from Halliburton. This has been one of Sen. Paul's longest-running hypotheses, dating back to speeches he gave in 2008 and 2009 during his bid for the Senate. He claimed that then-Vice President Dick Cheney opposed the advancement of American troops into Baghdad when he was defense secretary during the first Gulf War. But, because of his association with Halliburton and how much it stood to gain in the second post-9/11 Gulf War, he changed his mind and became an advocate.

This theory is actually common. But Sen. Paul took it a step further than most...

Rand Paul Conspiracy Theories No. 2 - The Bilderberg Group is trying to turn America into a communist nation. What does this even mean? In order to understand it, you must know a little about the Bilderberg Group. The Bilderberg Group consists of approximately 150 political leaders who meet annually at a private location to discuss political affairs - finance, academia, industry, etc. - without the presence of the media. What happens and what is debated in these meetings are top secret. The group has been criticized by the media for its lack of transparency. It's also the focus of a major conspiracy theory that believes the Republican Party is secretly controlled by elitist intellectuals belonging to the Bilderberg collective. According to the conspiracy, these intellectuals are working to turn America into a communist society.

One major proponent of this theory is radio personality and "9/11 truther" Alex Jones, who happens to be close friends with Sen. Rand Paul. In fact, in a taped interview from 2010, Paul responds to the question "Do you know anything about the Bilderberg Group?" by stating "Only what I've learned from Alex Jones."

A "9/11 truther," by the way, is someone who disputes the majority account of what happened on 9/11 and believes the American government actually played a significant role in the attacks, either through complicity or complete responsibility.

In the 2010 taped interview, Paul goes on to describe how the Bilderberg Group "is made up of wealthy people, I think, who manipulate and use government to their own personal advantage. They want to make it out like world government will be good for humanity. But guess what? World government is good for their pocketbook." 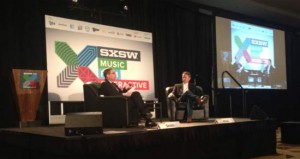 The trouble was, the project didn't exist. The rumored superhighway was a culmination of various rumors originating with Rick Perry's idea to create a Trans-Texas Corridor in the early 2000s. Though it would only exist in Texas, political conspiracy theorists surmised this Trans-Texas Corridor was the beginning of a mass North American superhighway. The Perry administration eventually dropped the idea altogether. It remains unknown as to why the Pauls made it an issue again in 2008.

Both Ron and Rand have also expressed concerns over the potential for the "Amero," (the currency belonging to their imagined massive North America). In his Montana appearance, Rand told the crowd: "I guarantee you it's one of their long-term goals to have one sort of borderless, mass continent."

Rand Paul Conspiracy Theories No. 4 - The "audit-the-Fed" bill. According to The Washington Post, Sen. Paul was not happy with the "Dodd-Frank financial reform that already audited the Fed's past emergency lending, and requires it to disclose any such future lending, too." He wants Congress to watch the Fed's every move and offer their second opinion on whether it should have raised rates or purchased bonds. In the same video where Paul expressed his skepticism of the Bilderberg Group, he quotes his father Ron as having once said he knew more about the CIA than he did about the Federal Reserve.

Paul likes to focus on the Fed because he believes that "the Fed, with its unlimited power to print money, now prints that money to lobby against Congressional oversight."

If that were true, it would mean that Janet Yellen, the Fed's employees, members of Congress, and their Congressional staff were committing major acts of political corruption.

A Controversy That Will Cost Americans Billions of Dollars: Auditing the Federal Reserve will be a huge issue in the 2016 presidential election. What could the Fed be hiding? A CIA insider sat down with us for an exclusive look at what the Fed is really doing to the U.S. economy... continue now to this full story, here.

I tend to agree with Rand Paul, I have seen 'evidence' from other sites that show 9/11 in it's real light. Also, why did they have all the 'debris' removed and 'off-shored', before it could be examined? Scared of people not finding any 'airplane' parts? Putin also released some Snowden material that shown how and answered a lot of questions.
http://stateofthenation2012.com/?p=7858 This allowed Bush to bring in the Patriot act. Just as in the UK the British government did a similar trick with 7/7, http://youtu.be/R7PQG5weeHk this helped them usher in 'terrorism laws' they would never have otherwise been allowed?
Again like other media, this one is no different "The Bilderberg Group consists of approximately 150 political leaders who meet annually at a private location to discuss political affairs" – They aren't just Political leaders, they are the money-men of the world, supposedly giving out their orders to their 'Puppets'?
Iraq 2003, was all about placing Iraqi Oil back to the 'Petrodollar', after 'Desert Storm' 2001, Saddam applied to UN to sell his Oil in Euros, in 2002 they said yes under the 'Food for aid program'. They did exactly the same to Gaddafi in 2011, when he advertised his Oil for sale in 'Gold-Dinar only. The gold for these 'coins' has not been found? Even now we have US tramping all-over States who don't use the 'dollar' as they try to avoid losing their hegemony!

"CONSPIRACIES" ARE A CIRCUS SIDE-SHOW

There are networks of people, often unrelated, who can be energized by those above them to do their bidding. You can detect this even in your own neighborhood or town. Its just most people don't detect anything on their own and have to be told. This is the audience that Alex Jones and Gov. Jessie Ventura tap into in their television shows about "conspiracy theories".

Senator Rand Paul could entertain his own fetishes and indulge the locals in Kentucky about Bilder-burgers, but now he is running for president, fringe issues won't get him nominated by moderate Republicans. In contrast, giving free hamburgers at political rallies just might win some people over to him.

Wealth has always been unfair and concentrated. In 1850, the Rothschild Banking family in Europe had half of the world's wealth to themselves. Today, they have to share it with a number (150-300) of very wealthy families around the world. Wealth remains concentrated and wealthy people have every reason to network amongst themselves now and then. Everyone else is out of the picture. So, a populist appeal in Kentucky with working class conservatives is a good base, but again, won't get Rand Paul to the White House.

We now have rule by Oligarchs for sure.

The Conspiracy Party of Governor Ventura, Alex Jones and Rand Paul is full of paranoia. The second Iraq war was voted by Congress in a bipartisan vote. The reason was to disarm Saddam Hussein of weapon of mass destruction to prevent Alqueda being able to use them. This was the information handed from the Clinton administration and the world intellegence to the new Bush administration.. It was never a personal war of Bush or Dick Cheny.

Pay more attention to the petro dollar my friend. That is what give us "the US" a bigger foothold in the world. Right now the American dollar is the main currency for trading in the world. It is worth about as much as monopoly money. The rest of the world sees this. Soon the petro dollar will fall, and so will the stock market. Pull the wool from your eyes and the truth shale be revealed.

sorry for blowing up face book post,,,you should give me some credence on this subject i have credentials that say ur wrong,