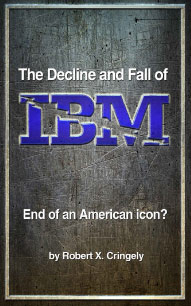 Robert X. Cringely has been a Silicon Valley journalist for three decades. He wrote a column in InfoWorld from 1987-1995 and continues to write for his blog Cringely.com. His work has appeared in the New York Times, Newsweek, Forbes, and several other publications. He wrote the best-selling book Accidental Empires: How the Boys of Silicon Valley Make Their Millions, Battle Foreign Competition, and Still Can't Get a Date, and has narrated and written two PBS documentaries on the history of computers and the Internet.

How much trouble is International Business Machines Corp. (NYSE: IBM) in? We recently talked to tech blogger and IBM book author Robert X. Cringely - and he sees a troubled road ahead.

Last summer, Cringely released The Decline and Fall of IBM: End of an American Icon? In it he explores the missteps that caused this once-feared, 100-year-old technology company to lose its edge in a rapidly growing tech landscape. Cringely has been following IBM's decline since 2007.

IBM's troubles began in 2003. That's when then-CEO Lou Gerstner - credited with reinvigorating a struggling IBM in the 1990s by transforming it from primarily a hardware company to a business services company - handed the reins over to Sam Palmisano.

Cringley wrote that under Palmisano, IBM sacrificed the quality of its enterprise tech services at the altar of misguided shareholder-friendly policies.

Through cost-cutting measures that included slashing jobs, offshoring services, and buying back shares with borrowed money, Palmisano helped bring on the deterioration of IBM, Cringely wrote. And that is being felt now by the new CEO, Virginia "Ginni" Rometty.

Rometty is faced with turning around a giant in the era of cloud computing and Big Data. She's identified cloud, analytics, mobile, security, and social (CAMSS) as the important growth initiatives for IBM. But has she been handed a company too badly beaten up to transform? Can she turn a ship around and abandon the destructive shareholder-friendly policies?

I spoke with Cringely to get his take. Here's what he had to say.

Money Morning: The last two years have been very humbling for IBM, as the IBM stock price has fallen 22%. The company abandoned a longstanding EPS pledge of $20 in October. They sold off businesses, most notably, their low-end server business to Lenovo Group Ltd. What was the most telling moment for IBM this past year, and what would you say is their biggest misstep?

Robert X. Cringely: I think the most telling thing was the abandonment of the earnings-per-share goal - the 2015 goal of $20 earnings-per-share. Frankly, [Rometty] should have done it the day after she took over from Palmisano. With his target, he said it; she had an option when she was appointed CEO - you get a mandate - and she got a mandate from the board to make some changes and she could have said, "Sam's a nice guy but he was a little over ambitious, I don't think we're going to make $20." She could have done that. But she didn't. She drank the Kool-Aid and she kept the $20 goal, which they weren't on a trajectory to do even then, and so I think that was a horrible misstep and repudiating it was a good thing and an inevitable thing.

However, the big error that they made... was selling the low-end server business, which makes little sense and sort of destroys some of their numbers in the act.

MM: It sounds like IBM sold the low-end server business because they weren't making money for the company - is that the case?

RC: They could have [made money from it]. They could have outsourced manufacturing. They could have done what Lenovo will do with it. Lenovo will make it a very profitable business. The important thing about the low-end server business is that it is the future of the server business. So to say, "Well, we're not making enough margins on this thing that happens to be the future, so we're just going to blow it off, get rid of it" - that's senseless. The better thing is to say, "How can we adapt to fit better with the future?" They make sounds about it with their current strategy, but they had it with that.

It's really important to look at what happened with that sale and its implications for IBM. First of all, they're not in the low-end server business anymore.