For April 13, 2015, here's how the stock market did today, the top stock market news, and stocks to watch based on today's market moves… 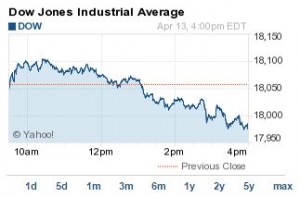 The DJIA today slipped 80 points on investor fear that a stronger U.S dollar will negatively affect earnings. The Nasdaq traded briefly above 5,000 before falling 7 points on the day.