For April 14, 2015, here's how the stock market did today, the top stock market news, and stocks to watch based on today's market moves... 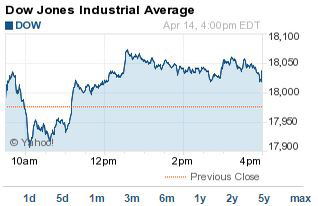 The DJIA Index gained 59 points as reduced expectations for quarterly profit outlooks were offset by energy sector gains and strong earnings results from JPMorgan Chase & Co. (NYSE: JPM). Shares of the banking giant gained 1.5% on the day. The S&P 500 Energy Index jumped 1.44% on the day.