But right now, Wells Fargo & Co. (NYSE: WFC) is trading at close to $55. From its lows near the tail-end of the recession, to the highs reached just this month, the Wells Fargo stock price is up almost 700%.

The story behind the Wells Fargo stock price delivers an important lesson for big bank investing. There are only very specific instances where big bank stocks are worth an investor's time.

"You catch them on the downside every time there's a huge correction and a financial panic and the banks get hit – that's when you buy them," Money Morning Capital Wave Strategist Shah Gilani said. "They're too big to fail; they're not going to fail. So anytime they get pounded, you buy them and you ride them back up to maybe their old highs or somewhere where you've got nice profits."

But the Wells Fargo stock price is simply not sending out this kind of signal right now.

"Why would you go into a bank, really? There are plenty of other places you can go in the stock market where you can get much better yield and have a safer investment," Gilani said.

And it simply isn't an attractive enough income investment to justify buying a stock that will, for the foreseeable future, likely trade in a narrow range at best. 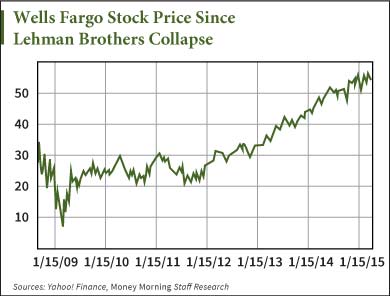 The Wells Fargo dividend yield is 2.58%. That's just about on par with the industry average. But if you're looking for dividends on a stock with no true growth prospects, a cigarette company is a better bet than a big bank. Try Altria Group Inc. (NYSE: MO) with its 4% yield. Or Phillip Morris International Inc. (NYSE: PM) at 5.2%.

"I don't see a positive for them," Gilani said. "People are sick of big banks."

And it's not just that there's little room for growth.

We are entering a new era for consumer lending, and that will only put further pressure on the already unimpressive big bank stocks like WFC…

Banks like Wells Fargo will take in deposits, issue bonds, or borrow at low rates from the U.S. Federal Reserve, and pay interest to hold those funds. They will then lend that money out at higher interest rates and pocket the spread. These are Wells Fargo's net interest margins.

When the Fed is putting downward pressure on rates and loan demand falls, this will shrink Wells Fargo's net interest margin and hit their commercial lending income.

In fact, net interest margins for Wells Fargo were 3.1% for 2014. This compares to a historical average of around 4.6% for the company. And it's the lowest their margins have been in 40 years.

So, you would expect that Wells Fargo is eagerly awaiting a Fed rate hike to reverse this collapse.

And while higher interest rates will certainly help Wells Fargo further down the road in widening these margins, it's the transition to a higher rate environment that's going to be tough…