CBS's "60 Minutes" program on Sunday examined the Sony hack from November 2014. The segment detailed just how ill-prepared most Americans and corporations are for cyberattacks. 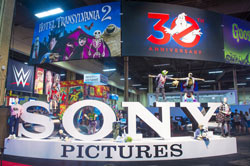 The interviews also underscored one of our favorite ETF trading trends of 2014: cybersecurity ETFs.

In the Sony attack, more than 3,000 computers and 800 servers were destroyed. Even worse, company secrets, unreleased movies, and the personal records of more than 6,000 employees were released.

And these attacks will become more common, not less common.

"We're going to see more and more companies hacked, we're going to see a deeper level of destruction," Cylance's Vice President of Strategy Jon Miller said on "60 Minutes" Sunday. "It's going to get worse before it gets better."
As the segment pointed out, it only takes one employee accessing an infected file to contaminate an entire corporate network.

Miller also said the number of people who could perform a similar attack is growing rapidly, perhaps even approaching 5,000. And "not all of them are in friendly countries," he said.

But most concerning of all is the fact that the Sony hack was not a relatively advanced cyberattack.

"My favorite analogy is: the malware that was used to attack Sony is like a moped, and the malware being used by United States intelligence agencies is like an F-22 fighter jet," Miller continued.

We've been highlighting the growing prevalence of cybercrime all year at Money Morning, because it's presenting us with one of the best ETF trading opportunities on the market.

Add This Tech Pick to Your ETF Trading Strategy