What happens in the resource sector is a great barometer for the world economy. Looking at where commodities prices are headed can even help us forecast what state the world economy will be in over the coming months.

Let's look at the major commodities, how they performed in Q1, and where they are headed in Q2 2015...

Commodities Prices: Looking Back at Q1 and Ahead to Q2 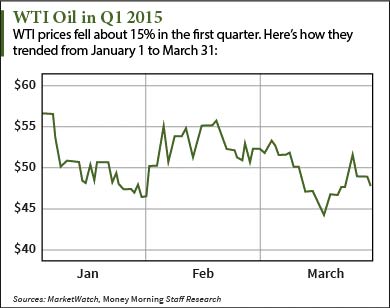 Lower prices will start having an effect on production in Q2. Reduced shale oil production in North America is already kicking in. The U.S. Energy Information Administration announced yesterday (Tuesday) it expects shale production in May of 4.98 million barrels per day, a decline of roughly 45,000 barrels from April. In addition, Saudi Arabia has begun raising May oil prices to Asian clients.

Look for these two trends to continue over the next three months. With that in mind, we could see oil end Q2 near $60 per barrel.

Natural gas prices have behaved similar to oil prices since last summer and in particular over Q1.

Prices started the year at $2.95 but ended the quarter at $2.64, losing 10.5%. April is when injection season starts, a time when restocking takes place after higher winter consumption.

Natural gas is currently below the five-year average inventories, which is bullish. But much will depend on the weather. An unusually warm spring and early summer will spur consumption and boost prices. Below-normal temperatures will dampen prices.

Given my expectations for higher oil prices and a forecast for higher than normal temperature in the western United States this spring, I think we could see natural gas prices end Q2 around $3.00, or about 14% higher.

Longer term, I'm bullish on natural gas given Mexico's appetite for U.S. exports, which has been gaining steam. This factor should get an even bigger boost in the next couple years as pipeline capacity ramps up, sending even more production southwards.

Now, let's look at where precious metals are headed in Q2 - starting with gold...