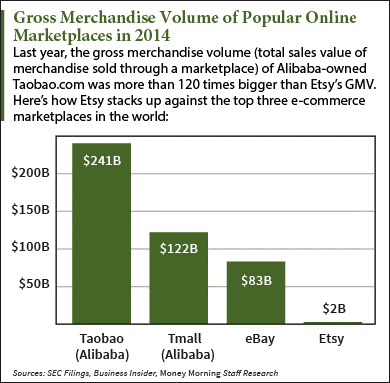 The Etsy IPO will be priced after market close today, likely around $14 to $16. The Etsy (Nasdaq: ETSY) share price, if it follows a typical first-trading-day pattern, will jump from there - but will have trouble maintaining any first-day pops.

The IPO is one of the most talked-about tech deals this year. Etsy plans to raise $250 million by offering 16.7 million shares.

But the long-term performance of the Etsy (Nasdaq: ETSY) share price has some hurdles...

These sites also have significantly more users. Statista reports that Etsy has 54 million registered users as of December 2014. That pales in comparison to Alibaba's 300 million users and eBay Inc.'s (Nasdaq: EBAY) 155.2 million users.

But there's one aspect of the company that has the largest influence on the Etsy share price...

The Biggest Influence on the Etsy (Nasdaq: ETSY) Share Price

The company's B Corporation values will determine where the Etsy share price goes after its April 16 debut.

The B Corp. status defines Etsy's mission and culture. The certifications are awarded by B Lab, a non-profit that, according to its website, "uses the power of business to solve social and environmental problems." B Corp. certifications are given to firms that meet certain social, environmental, transparency, and accountability standards. Some B Corp. initiatives are providing employees bikes for their commute and composting food wastes.

B Lab reports that there are 1,257 B Corp. companies across 38 countries and 121 industries. Etsy will be the largest B Corp. company to go public.

Etsy wants investors to embrace its mission to be both socially conscious and financially successful.

"It's like a beautiful test in a way to see if it's possible to have a mission beyond money," said Rett Wallace, CEO of Triton Research, to Bloomberg. "You see these situations all the time where even management is doing their best to take every penny off the table - regardless of what it does to the widows and orphans - you often see fund managers saying, 'You're not doing enough to make money.'"

The Bottom Line: Like every other stock, there are a variety of factors that can influence the Etsy (Nasdaq: ETSY) share price. While GMV and users are important, Etsy's dedication to upholding its B Corp. standards jeopardizes its profitability.

More on 2015 IPOs: There were more IPOs last year than any year since the height of the dot-com era in 2000. The tech sector is poised to dominate again as massive startups like Uber and Snapchat are rumored to go public. Here are 15 tech IPOs that will explode onto the market this year...