For April 15, 2015, here's how the stock market did today, the top stock market news, and stocks to watch based on today's market moves... 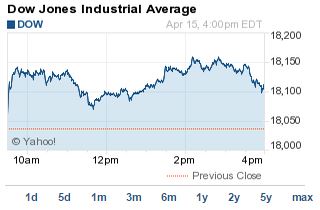 The DJIA Index rose 75 points Wednesday on strong energy stock gains and improving confidence in first-quarter earnings. A strong U.S. dollar, winter weather, and a massive West coast port shutdown may not have affected companies in Q1 as much as previously expected.

Shares of Netflix Inc. (Nasdaq: NFLX) are surging more than 12% in post-market hours on news that the company shattered earnings expectations.