For April 16, 2015, here's how the stock market did today, earnings reports, the top stock market news, and stocks to watch based on today's market moves... 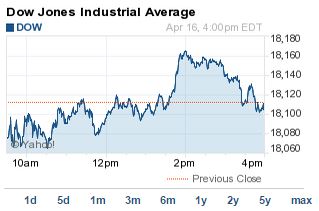 The DJIA today gave up mid-afternoon gains to end the session down 6 points amid mixed earnings reports and lackluster economic data. Weekly jobless claims jumped to a six-week high this morning, although the moving average remains near a 15-year low.