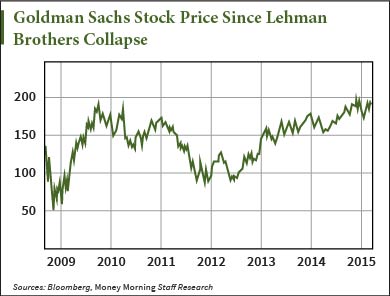 Goldman Sachs stock price movements were muted yesterday (Thursday) on what was a wildly successful earnings season for the investment banking giant.

But traders on the day weren't impressed. The Goldman Sachs stock price fell Thursday to $200.21, a 0.4% drop.

The market's instincts are correct on this one. There is no reason to pile into GS stock right now.

Big bank stocks are not the best place to put your money.

And Goldman Sachs has its own challenges ahead...

GS stock, like many big bank stocks, doesn't provide much long-term, buy-and-hold value - at least not at this time.

Your best bet on a stock like this is to wait for some sort of banking panic, like in 2008. The collapse of Lehman Brothers and the ensuing financial crisis sent the Goldman Sachs stock price down to $52 by November 2008.

Investors who bought when there was blood in the streets and held until now would have pocketed close to 300% gains.

But the Goldman Sachs stock price has all but hit its ceiling. There isn't another 300% gain on the horizon for GS stock.

If anything, GS stock has even more uncertainty to contend with moving forward, primarily on the regulatory front.

If there's anything the financial collapse taught us, it's that Congress has no shortage of knee-jerk, short-sighted Band-Aids it will attempt to pass under the banner of "Wall Street reform."

Even though you did not mention it, I believe the extraordinary results are related to its European strategy of demolishing the Euro. It worked equally well in the housing collapse for them: Sell Toxic Junk paper at high prices, bet against it by by shorting them, and cover the predictable losses with CDS. All invisible to the unsuspecting investors. If it comes out, GS may face a lot more than the Volker Rule. RH