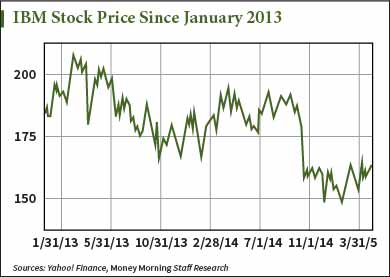 The IBM stock price was hit late in the week by Wall Street's bearish analysts, who doubled down on their less-than-optimistic assessments of Big Blue.

Put simply, IBM is in trouble. The struggles of this giant in transition amid a shifting enterprise tech landscape have become so entrenched, that it may not take much to hammer the IBM stock price.

IBM stock has already fallen more than 20% in the last two years. And some analysts see a further 20% decline in the IBM stock price as CEO Virginia "Ginni" Rometty tries to turn the ship around.

"If the broader market gets a little weaker, then stocks that are weak relative to the market like IBM are going to get punished more - people are going to jump out of those first," Money Morning Technical Trading Strategist D.R. Barton said. "Institutions and money managers are going to hang onto their stronger holdings and start pruning from the bottom up."

The talk of IBM on Wall Street is that come Monday, IBM earnings will reveal a 12th consecutive quarter of declining revenue.

Make no mistake about it: this will happen. IBM wants it to. It's a part of their strategy.

That's why before reading too much into IBM earnings this quarter you'll want to know the true story behind why the IBM stock price is falling...

Why the IBM Stock Price Has Struggled

IBM is pursuing two strategies right now that can't work alongside each other - at least not without a lot of pain for shareholders.

First and foremost, their most visible strategy is to rush headlong into five strategic growth initiatives. They revolve around cloud, analytics, mobile, security, and social (CAMSS).

This goes with IBM's longstanding policy of delivering high value. They want to shed the business segments that are least profitable, deliver high margins, and build shareholder value.

This isn't new for IBM. The value-building strategy is something that goes back to the days when Louis Gerstner was CEO in 1993. He abandoned the PC price war with Microsoft Corp. (Nasdaq: MSFT) and turned IBM into a global services company.

It's why IBM sold its PC business to Lenovo Group Ltd. (OTCMKTS: LNVGY) in 2005 and later its low-end servers to them last year. It's why they paid GlobalFoundries $1.5 billion to take their chip business off their hands.

IBM is a 103-year-old company and there was a time that as a long-surviving tech behemoth, it could sail along on its brand name. That was enough of an advantage to secure their clients' trust and keep them coming back to IBM for enterprise tech products and services.

"The customers relied on IBM to tell them to buy the right things," tech blogger and author of a book on IBM's struggles, Robert X. Cringely told Money Morning. "IBM... took a very paternalistic approach with its customer base and it was very successful for a long time in doing that."

The approach has since broken down. It began with the shift to global services in the 1990s. The service-focused company stopped innovating with hardware - wary of the high margins - and the IBM name began to fall out of favor.

And this focus on high margins has the same hurdles re-emerging in their push to transform...

The opening salvo in the protracted IBM stock price decline came in late 2013 when Big Blue lost a $600 million contract to handle cloud services for the CIA - to Amazon.com Inc. (Nasdaq: AMZN). But this was not because Amazon has the experience and a superior cloud product to take on a contract.

It was that IBM didn't have a product. They essentially auctioned off the IBM name and its history of delivering secure systems, not an actual cloud solution.

In this one instance "Amazon has a status and standing and IBM doesn't," Enderle said. "That was a very critical and painful way for the company to find out."

IBM is not completely hopeless on cloud. Their purchase of SoftLayer in the summer of 2013 has given them a good base to build their cloud portfolio, which has expanded since then. This month, they announced the U.S. Army will use IBM's Hybrid Cloud for "one of the federal government's largest logistics systems."

But in the grand scheme of things, they can't win in the cloud. The three-way price war between Amazon, through Amazon Web Services, Google Inc. (Nasdaq: GOOG, GOOGL), through its app engine, and Microsoft, through SQL, is going to continue to erode prices and with it, the IBM high-value strategy and ultimately the IBM stock price.